The local herbalist and healer of Corustaith, this old druid is averse to danger, busying herself instead by tending to the local people, the animals, and the health of the trees. She is font of local knowledge and practical wisdom.

An old woman of the woodsfolk of the Gnarley, Dresha the Herbalist has a serene and eminently optimistic quality that tends to put those around her at ease. Her exact age is difficult to guess, for although she is clearly in her twilight years her ebullient demeanour makes her seem quite youthful, despite the lines that mark her face and her very long, grey hair. It is known that she has watched over the forest near Corustaith for more than sixty years, and although her looks favour her human heritage, the observant might note that her ears are slightly, subtly pointed, also giving away her elven ancestry.

Dresha the Herbalist has dwelt in the village of Corustaith ever since Arian Blackbrow built his lodge and founded the settlement in 528 CY. Her reputation as a healer and mid-wife is well-established throughout the Central Gnarley Forest, but locally she is also known to be a druid in service to the Archdruid Hildefer Paravis. Like most of her brethren and sistren among the druids of the Gnarley Forest, she reveres Ehlonna, and she serves the local people as their touchstone to the goddess of the forest. Unlike Parsimmon and Cedris, Dresha appears to have little interest in meeting with the good and the wise unless they actively seek her out, but she often sees them incidentally as she also frequents the Gilded Acorn, where she enjoys cooking with the wizard or brewing ale and mead for the patrons. She also has a strong voice and skill with the harp, and she sometimes entertains the taproom of the Gilded Acorn with songs about local folklore, legends, and people of note.

Both Cedris and Parsimmon consider her to be something of a mentor, even though both have long since outstripped Dresha in power and knowledge. Indeed, many of the Rangers of the Gnarley who have studied under Parsimmon or Arian Blackbrow consider her to be something of a teacher, and they often approach her house calling for “Aunt Dresha.” She and her two mated talking owls always seem to know when they are coming, and she never fails to greet them by name. Haemir Hellbrand is just one of dozens of rangers who look upon the old druid with much affection for what little he knows of healing was learned at her feet.

Among the woodsmen of the Gnarley Forest, she is known as someone who can make many herbal concoctions for healing, digestion, and fertility. She has also served as midwife for dozens of local mothers, and they revere her for seeing they and their offspring through the ordeal of childbirth. The Rangers of the Gnarley and their friends know that for the right coin or promise of favour, she can also brew potions and make magical poultices. 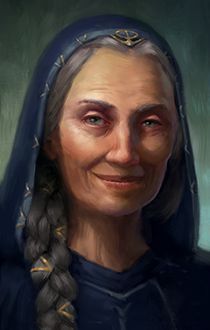