Duell of the Gnarley

A humble furrier and forester, this woodsman is something of a leader among the homesteaders who dwell in his part of the Gnarley Forest. He is a Druid of the First Circle of the Old Faith.

A middle-aged hunter, clad in furs and roughly cured hides of that provide warmth and protection in the wild. He is quite healthy and strong from the rough life he leads, but he looks like he could use a good bath and the attentions of a barber, for his aspect is almost fell with the filth that clings to him. He is armed with a spear, a club, and a long hunting knife, all of which seems to have seen many years of use. A mutt of a hound with mottled fur dogs his steps.

Duell of the Gnarley was first encountered by our heroes on the 22nd of Planting, 591 CY, as they encamped at a shared ground off the road near the intersection of the Dyvers-Taymouth and Ketter’s Hearth trails. At the time, they were investigating the odd disappearance of several of Jansen’s Runners, a courier service that rides between the viscounty and the free city on the Nyr Dyv. When the party arrived in the camp, they found the woodsmen on the north, most sheltered fringe of the ground, while the south was taken up by Lady Haxx and her retainers. The Verboboncian lady and her entourage kept a good distance from the humble camp of the Gnarley woodsfolk who made their fires not thirty paces distant, and it was clear that some antipathy existed between the two groups. As our heroes made their own camp in between, Duell noted the insignia of a Gnarley Ranger worn by Haemir Hellbrand, and he favoured the half-elf with a friendly nod. They exchanged perfunctory greetings before Duell returned to his wife, son, and the other families of the woods.

Later that night, when Gnoll bandits attacked the camp, Duell led the Gnarleyfolk in defending their children. None of them, himself included, were great warriors and they likely would have been overwhelmed without the assistance of the adventurers. Instead, the dog-men were repelled, and in the wake of the fight, Duell was observed healing several of his fellows through prayers offered to Beory, the Oerthmother.

In thanks for their assistance, and out of a sense of general compassion, the druid offered to assist the party in finding the missing lady-in-waiting, Eliaria, the next morning. His considerable skill at tracking and knowledge of the local forest was invaluable at speedily locating the lair of the gnolls and rescuing the young woman. During the fighting in the Cavern of the Dog-Men, he kept himself to a support role, again using his magics to heal injured allies. Afterwards, he gratefully accepted his small part of Lady Haxx’s reward and returned to his family.

Duell of the Gnarley 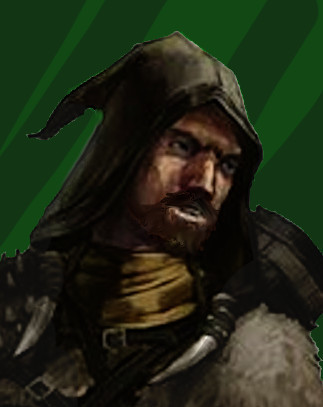