A valiant warrior and wizard of the Fae Kingdom of Celene, this grey elf is exiled from his homeland. In service to the Knights of Luna, he dwells in the court of the Principality of Ulek.

An unusally strongly built Faerie Elf noble, exotically handsome with his angular features, violet eyes, and golden hair. Aside from his thistledown cloak, he favours midnight blue and silver in his attire, threaded with the motif of Oerth’s two moons in alignment above a silver oak tree. He has a pronounced fondness for moonstones, and the gems found on his ring, his belt, and his pendant seem to glow with an inner light all their own. His sword and dagger, both of beautiful elven craftsmanship, are also inset with moonstones.

Throm Mushroomhead first met this valiant warrior and wizard when the grey elf led a score of his fellows to the assistance of Rourk Splinterstone and his soldiers in 584 CY. Arriving in the thickest part of the night on the eve of the Battle of Celene Pass, the elves were met with disbelieving eyes at first, and then a hearty cheer when the captain greeted them warmly. It was soon made clear that many of them were members of the elite Companion Guard who had disobeyed their orders and deserted their post at Arnbael (a hidden stronghold overlooking the Crystal River near Ulek) in order to come to the assistance of the people of the League of Right. There were few among the rest of the elves who were not veterans of the Hateful Wars, and all were finely skilled in the use of the bow, the spear, and the sword. Owing to their experience, they were assigned in small groups across the lines of the redoubt to provide the benefit of their expertise and their aim. Eleel and a couple of his companions were assigned to the section of the brothers Shatterhammer, both of whom were in no small awe of the lordly elf.

Throughout the battle to come, he and his two companions Ranaeril and Edraetha supported the dwarves, gnomes, and men who stood on the front lines of the earthen rampart, using their bows to pick off enemy leaders in order to sew confusion in the enemy ranks. Eleel in particular was a noteworthy combatant, especially since his proficiency in the wizardly arts was well-married to his skill as a bowman. Every arrow he loosed briefly glowed with magical energy, and he also displayed the ability to infuse his arrows with spells that could be set off at the longer range of his bow. No less a villain than Turrosh Mak himself was wounded by a Fireball spell embued in one of Eleel’s arrows and then shot more than a 1000 paces at the banner of the Tyrant of the Pomarj. The Mak survived the explosion, but a number of his valued advisors did not. Several times during the battle, when the line threatened to break, Eleel was observed to display great skill with the sword, and also the ability to quickly transform his silvery bow into a quarterstaff and back. In the latter arrangement, he was noted for batting aside the incoming arrows of the enemy.

At a desperate moment in the battle, Eleel was knocked senseless, and only speedy assistance of the brothers Shatterhammer kept him alive. Sadly, as they dragged him behind some cover, Thorm would pay for his courage with his life as an arrow fatally struck him while he shouldered the burden of carrying the stunned elf lord. That same night, Edraetha would be slain by the same half-orc bowman, as would Ranaeril on the following morning. For the remainder of the Battle of Celene Pass Eleel and Throm raged at the enemy archer, but the bastard could not be goaded to come closer, and he avoided the elf’s attempts to slay him from afar with his arrows. The enemy bowman would later retreat from the battle when Turrosh Mak elected to withdraw to the south once more, smirking all the while at the thunderous insults of Throm.

To this day Eleel would pay handsomely for information leading to the whereabouts of the archer, and his silver has at least bought the name of the villain: Lurnok the Black, named so for his penchant for painting his face and hands so to match his garb.

After the Battle of Celene Pass was done and the reinforcements arrived, only thirty of Rourk’s warriors yet lived, and among the elves only Eleel and two other elves were among the survivors. All of his fellow Companion Guards were dead, their blood mingling in the mud with that of dwarves, gnomes, halflings, humans, and even orcs, gnolls, and ogres. Moreover, he knew that he could not return home, for his abandonment of his post and leading of others to accompany him would lead to charges of insubordination, dereliction of duty, and perhaps even treason. Instead, he remained with the people of Ulek, and saw out the remaining months of the conflict before the Treaty of Greyhawk was signed.

Throughout the years after, he has dwelt at the court of the grateful Prince Olinstaad Corond, who addresses him not as Eleel but by his otherwise neglected name and station: Eleelionas Alafftra, Prince Moontree, a cousin to none other than Queen Yolande, Lady Rhalta of all Elvenkind. Although the name of his nation has been blackened throughout the Principality of Ulek, his status as a hero of Celene Pass is well known, and he receives nothing but respect wherever he goes. Indeed, the bards of the south sing his praises along with those of his brothers among the League of Right, and his legend grows. Apparently, his house is named for his remarkable bow, which is both an ancient heirloom of his family and also the reason that they are named Moontree.

Over the years the exiled elf lord has spent his time at the court of Gryrax serving as an unofficial ambassador for the Knights of Luna. The friendship of Eleel and Throm would grow during the paladin’s time at the prince’s court, and the dwarf has found him to be more than a little impulsive, with a tendency to make decisions quickly and based on his instincts for he feels that the heart is a surer compass than the head. Once he has made a decision, Eleel can be stubborn too, and despite missing his homeland and his family deeply he claims to have no regrets other than having lost his brothers and sisters in arms and also that was unable to convince more elves to march to the defence of their “uleki brothers.” Nonetheless, with all his great heart Eleel believes he is on the right side of history, and he proudly endures his exile from Celene.

In the meanwhile, Eleel is fully committed to the mission of the Knights of Luna, and he is pleased to serve as their envoy to the court of the Prince of Ulek. At present, he is most concerned with using his connections to elven adventurers to funnel intelligence and magical aid to the principality, knowing that the dwarves’ paucity of wizards and sorcerers is a potentially disastrous weakness in their wars with the Pomarj. When not attending Prince Corond’s court, he dwells in a small house amid a copse of aspen trees on a low hill overlooking the bay, perhaps a ten minute ride from the northern gate Gryrax. His only constant companion is his familiar Estanulil, a red forest fox, who is unusually large and courageous for one of his kind. He usually heels Eleel, darting around to satisfy his curiosity or seeking a morsel here and there. When he gets bored or desires a nap, the fox tucks himself into an extradimensional pocket in his wizard’s cloak or robes. 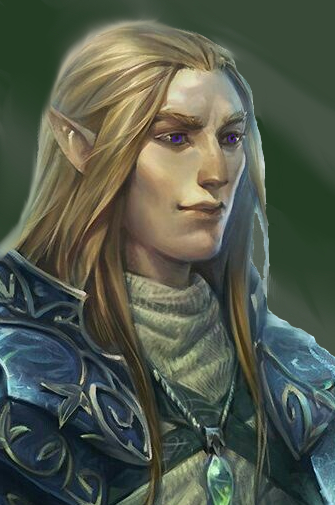