A dwarf of renown and hero of the League of Right, this veteran warrior and adventurer was also a sometime ally of the powerful mage Ringlerun. He now dwells in the Principality of Ulek.

This cheerful Hill Dwarf has an alert look to him, as if he has seen a great deal of action in his life and he expects to see more at any moment. His black beard is starting to show a good deal of silver; he keeps it meticulously groomed and oiled, perhaps as an offset to the heavy scars that mar his face. Even for a dwarf, he is short, being almost as wide as he is tall, but his build does not seem to be particularly strong. He is armed with a fine sword, distinctive for the huge ruby set into the pommel, as well as a dagger decorated with carnelians and serpentines. Both are clearly of dwarven make. A crimson shirt of silk draws your eye, as does his rare thistledown cloak, a distinctly odd choice of apparel for a dwarf.

When girded for battle, he wears battle-scarred half-plate and mail as well as a gilded, horned helmet with three large rubies, obviously of sturdy dwarven construction, and he keeps a light shield made of stout oak, painted with a red field and a motif of a single deer antler. A specially constructed sheath on the inside of the shield holds a small throwing hammer. At such times, on his belt loops he also keeps a dwarf-crafted handaxe, a collapsible hand-crossbow, and a small quiver holding some quarrels.

A stranger who was obscure to the folk of the Principality of Ulek before the Battle of Celene Pass, Karad Elkhorn has since become known as a hero of the League of Right. Back in 584, the battle-scarred warrior and his best friend Figgen arrived at the scene on the eve of battle as Rourk Splinterstone and his men were furiously digging their earthwork redoubts in advance of the arrival of Turrosh Mak and his horde. Briefly suspicious of the two, Rourk was quickly disabused of the notion by their offer to immediately grab some shovels and join the line. Over the coming desperate days, where 200 dwarves, men, gnomes, halflings, and elves faced an army of thousands, Elkhorn and Figgen became legends for their skill in battle and efforts to raise the morale of their less battle-hardened brothers among the defenders by singing ribald ballads or rousing war chants.

In particular, throughout the course of the battle Elkhorn was noted for his preference for fighting with sword over axe or hammer, although he sometimes released the sword to fight on its own while he quickly fitted a bolt to his hand crossbow and let loose to pick off some distant target who was pressing dangerously on another defender. Indeed, Elkhorn almost seemed unkillable from the number of wounds and near misses he took in the Battle of Celene Pass, and songs are sung of the duo of he and Figgen fighting in tandem to close a gap or buy time for others. Their fame has brought news to Ulek that prior to their arrival at Rourk’s Redoubt, they were both active in the defence of Chendl as the bodyguards of the great, late mage known as Ringlerun.

In the years since the War of Reclamation in 586 CY, Elkhorn has settled among the garrison of Thunderstrike, the citadel and town in Prinzefeld on the Suss verge some 200 miles south-east of the new barony of Passwatch. A dangerous posting indeed, for the settlement is frequently cut off from reinforcements and supplies from Havenhill and the garrison line of forts in the hills to the west. Elkhorn is known to be a valued warrior in the garrison there, and quite the dwarf about town. He seeks a wife from among the dwarf maidens of Thunderstrike, but despite his status his lack of local clan ties hampers his hopes for he refuses to abandon his own, no matter how distant they may be. In truth, he is a little guarded about where his clan actually resides, save to roughly say they are far to the east, and beyond his ability to return for the nonce.

Elkhorn still occasionally meets up with his best friend Figgen to assist him when the halfling knight comes to the south on the business of the King of Furyondy. His status as a hero of Ulek allows him a little more leeway to act outside the needs of the regular army, for his superiors know that whenever he and Figgen get together, orcs will almost certainly die and the cause of the principality will benefit. 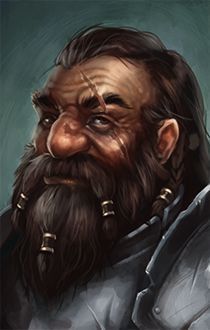