One of the newly established order known as the Knight-Protectors of Furyondy, this famed halfling warrior was once the companion of the great mage Ringlerun. He now serves King Belvor IV, frequently as a messenger and agent abroad.

A good-looking fellow of the hairfoot peoples, this halfling looks to be approaching his middle years. He is obviously wealthy, perhaps even a noble, judging by the fine cloth and cut of his doublet and hose, and his sword and dagger rest in matching scabbard and sheath decorated with carnelians, jasper, and moonstones. On his pinky rests a golden ring depicting a wagon-wheel.

When girded for battle, he wears a finely crafted suit of plate and mail, an open faced helmet, and a small shield of oak painted with a white field bearing a wagon wheel. At such times, a heavy and unusual sling is kept at his belt.

A stranger who was obscure to the folk of the Principality of Ulek before the Battle of Celene Pass, Figgen has since become known as a hero of the League of Right. Back in 584, the noble-hearted Figgen and his best friend Elkhorn arrived at the scene on the eve of battle as Rourk Splinterstone and his men were furiously digging their earthwork redoubts in advance of the arrival of Turrosh Mak and his horde. Briefly suspicious of the two, especially as none of the dwarves present had ever seen a halfling armoured in plate and mail like themselves, Rourk was quickly disabused of the notion by their offer to immediately grab some shovels and join the line. Over the coming desperate days, where 200 dwarves, men, gnomes, halflings, and elves faced an army of thousands, Figgen and Elkhorn became legends for their skill in battle and efforts to raise the morale of their less battle-hardened brothers among the defenders by singing ribald ballads or rousing war chants.

In particular, throughout the course of the battle Figgen was noted for the speed and mobility with which he moved despite his heavy armour, ducking and weaving fowards and back throughout the line to fatally strike vulnerable enemies who failed to be respect his small size. He was also a frightening shot with his heavy warsling, sometimes slaying two enemies at once by ricocheting a shot from several hundred feet away. He and his friend were most effective though when they fought side by side or back to back. Songs are sung of the duo of he and Figgen fighting in tandem to close a gap or buy time for others. After the battle their fame soon brought news to Ulek that prior to their arrival at Rourk’s Redoubt, they were both active in the defence of Chendl as the bodyguards of the great, late mage known as Ringlerun.

In the years since the end of the Greyhawk Wars, Figgen has been seen but rarely in the Principality of Ulek. His fame grows however, and he has been noted fighting in the armies of the Kingdom of Furyondy during the Great Northern Crusade and the unending war against the Old One that followed it. It is known that for his valour he was knighted by King Belvor IV in 588 CY and, inducted into the new order of the Knight-Protectors, he bases himself in the capital of Chendl some 850 miles to the north of the new barony of Passwatch. Very occasionally he comes to Ulek on the business of his king, always to borrow Elkhorn from his posting at Thunderstrike to engage on some adventure or intrigue that invariably profits the forces of weal. 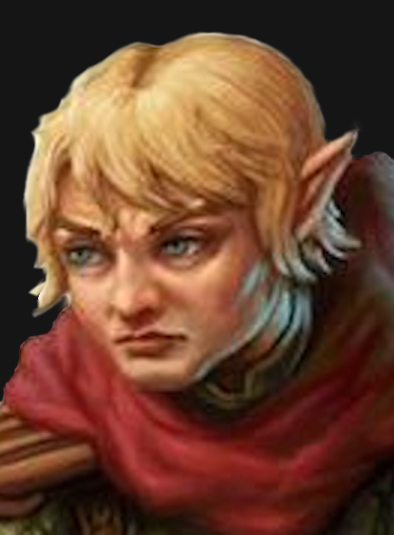