A gambler, drinker, rake, and "locksmith-for-hire," this rogue wanders the lands of Verbobonc, Dyvers, Greyhawk, and southern Furyondy, staying one step ahead of his creditors and one step behind his luck.

An older man, almost pushing sixty, of rake thin build but still carrying himself with a lively step. He is clad in fine studded leather armour and well-tailored clothes, though both look like they have seen much more wear and tear than a man of his prosperous airs would allow. Clearly he is down on his luck, and has been for some years. Even so the fellow seems to take pride in his appearance, keeping his long grey hair, moustache, and goatee beard carefully combed, as well as sporting a wide-brimmed hat graced by a long peacock feather. He arms himself with a brace of four slender throwing knives on a baldric, from which also hangs a rapier on his left hip. A long dagger is sheathed in his boot.

This rogue was first encountered by the Company of the Silver Spear in the river town of Rhynehurst where, down on in his luck, he attempted to cheat Candyce at cards. As it happened, she was attempted to cheat him also, and their mutual deception was detected by each at precisely the same moment. Rather than find disagreement he, Candyce, and Ruprect found the situation tremendously funny and struck up an instant camaraderie which was cemented by a night of excessive boozing and other hijinks. When the band decided to move on, they offered him a place among their number for a time, and generously outfitted the hard-luck rogue with a silvered weapon in case they ran into were-creatures on the road south to Visengart. Impressed with their largesse, and with neither funds nor avenue to readily gain more, he brought his nag, Myrtle, and joined them on their quest to throw down the undead raids that plagued the lands of Lady Stefania.

Over the course of the subsequent events that led to the downfall of Vandros the Necromancer, Furnok proved himself to be a top-notch “locksmith” as well as quite adept in the discovery and disarmament of traps, although he was also content to stand back and let Ruprect and Candyce hone their own skills. He also showed himself to be tasty in a fight, especially for a man of his advancing years. He favoured the use of the rapier and the throwing dagger, proving to be unerringly accurate with the former and both graceful and deadly with the former. On several occasions he stood between Candyce and certain doom, taking grievous wounds for his trouble. Lastly, Furnok seemed to be in possession of a rare and coveted Ring of Invisibiity, which he used to good effect in the final fight against Vandros and his henchmen.

He was a genial travelling companion, full of stories about his travels throughout the northern Sheldomar, Veluna, Verbobonc, Furyondy, and the domains of Greyhawk and Dyvers. His odd accent, he claimed, was because of his youth spent among the dwarves in the northern foothills of the Barrier Peaks, and while Throm doubted his tale it could not be argued that Furnok had a good command of the dwarvish languish. He pretended at having a noble, well-heeled manner but it was clear when under pressure or angered that his origins were lowborn and his life largely spent in low taverns rather than high towers.

Although he allowed that he “had come down in the world,” Furnok (with false modesty) told tales of having “assisted” the heroes that were involved in the destruction of the Second Temple of Elemental Evil, and that he had made good as an adventurer for most of the years since. When Throm told him to wait behind to guard the carts, the horses, and the wounded prisoners, the old rogue was deeply insulted, sputtering in his thick accent that he was “a fucking hero, not a nursemaid.” His smugness when later called back to pick a lock was obvious, and he was quick to remind Throm that there is no substitute for experience. The dwarf managed to insult Furnok several more times throughout the trials in the Crypt of Vergo Solmenicus, and there relationship is best described as cool. He was much more fond of Candyce and Ruprect, both of whom shared his love of gambling, carousing, and music.

Soon after the quest was successful, Furnok decided that the Company of the Silver Spear “was headed into a run of bad luck” after a series of perilous encounters in the Kron Hills. After nearly losing his life in the jaws of a dire wolf, he saddled his old horse and decided to make his way back to Visengart and try his luck elsewhere. Perhaps Loren’s Ford and then the west of the viscounty, he said, or perhaps back to Rhynehurst and over to the capital. He shrugged, then, and spread his hands as if to say, “who knows?”

Furnok of Ferd then wished the band well, swept off his hat in a chivalrous bow, and rode off to the west. More than one of them tested the weight of their coin purses as they watched him go. 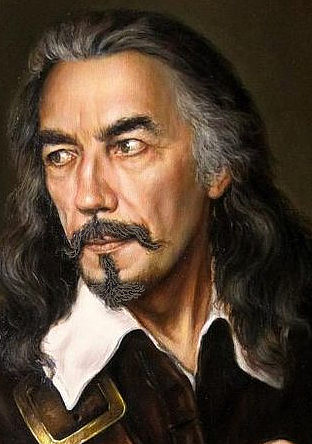