The bishop of the Cudgeller in the Viscounty of Verbobonc, this old man is a potent divine spell-caster, wise counsellor, and ruthless politician as the occasion warrants.

A short man in his sixties, stout and paunchy of physique, with prominent jowls and hawklike features. What remains of his hair is more white than grey, and his side whiskers might lend him the air of a disreputable old lecher but for his piercing, hard eyes and his upright, even military posture. He wears the russet clerical vestments of St. Cuthbert, along with a large, ruby-studded golden holy symbol and a pin depicting a starburst. A heavy mace rests at his belt.

This powerful cleric and canny politician has been the head of the flock of Saint Cuthbert in the Viscounty of Verbobonc for more than thirty years, and under his zealous, charismatic purview, the already popular religion of the Cudgeller has grown to easily eclipse all other faiths in the land. Haufren has a reputation for being hard-nosed regarding the beneficence of his church, and he expects his junior priests to follow suit; charity begins at home, and those seeking the spell-casting and healing services of the Cudgellers had best be of the faith, or else willing to pay handsomely for the privilege. Even those of the faith should not expect free spell-casting unless there is a clear and present benefit to the church, the land, and their god. Indeed, Bishop Haufren is not at all averse to demanding that adventurers upon whom he bestows the blessings of Saint Cuthbert submit to Geas/Quest spells to make sure that the church gets full satisfaction from the “generosity.”

That said, he is not without kindness, nor goodness, in his heart. He was a stalwart friend and ready advisor to the late WIlfrick, and Haufren heroically rode at the side of his beloved viscount at the Battle of Emridy Meadows. In the wake of that resounding victory, he continued to advise the House of Greyfist most ably, serving prominently as a hard but fair voice on the small council of the viscount as well as a more intimate influence through his role as friend and confessor. It was in this last capacity that he would become aware of Langard, the natural son of the viscount by an elven mistress that he kept throughout the 1160s and early 1170s.

When Wilfrick’s younger son Horrus displayed a talent for channelling divine magic, Bishop Haufren would also serve as his mentor in the faith of the Cudgeller. In doing so, he took care to make sure that the young lord humble saw his brothers and sisters in the faith as his equal throughout the training for the priesthood, and Horrus earned his bruises in the practice yard just as frequently as the younger acolytes, which included Oscar Scarlord. The young aristocrat had a tendency to brood, but he was a kindly and likeable young man who was well-loved and respected by the people and by the younger aspirants of the order. Unfortunately, the good bishop’s relationship with Fenward, the older son of Wilfrick, was less ideal, for he grew up to be venal, greedy, and not at all conducive to the word of the Cudgeller. Lady Elysia, the viscount’s adopted daughter, understood the dogma and the morality of the faith readily enough but she cleaved far more readily to the tenets of churches of Rao and Delleb more than the that of the hardy Saint Cuthbert. Wilfrick himself aged poorly, and other than the construction of the noted castle known as Doomwatch in the village of Hommlet, he grew indecisive and somewhat feeble in his twilight years.

After graduating his training to become a fighting priest of Saint Cuthbert, Horrus embarked upon a life of adventure in service to the faith. In this capacity, he suddenly vanished in 586 CY, and the news of his loss caused a rapid decline in the health of his ailing father. Wilfrick passed on the following year, leaving the arrogant and brash Fenward to take the reins of the viscounty. Unlike Horrus, Fenward cared little for the common folk and he had no sympathy at all for the gnomes of the Kron Hills. After a few sallies in force against troublesome bandits and humanoid raiding bands, Fenward suspended all patrols of the Kron Hills and the Gnarley, claiming there were no enemies to defend against. The proclamation scandalised the Lord Mayor, Bishop Haufren, Prince Jimm, the Mounted Borderers, his fringe nobles, and the gnomes of the Kron Hills, but the viscount turned a deaf ear to their reports that banditry immediately increased. Taking the matter a step further, the gnomes then threatened to refuse taxation and seek trading partners elsewhere, to which Fenward responded with a racial slur and a threat to use force to ensure their compliance to his taxes.

In accordance with his style, Bishop Haufren then passed on offering the young viscount gentle suggestions. Instead he remonstrated, earning a rebuke of his own from his lord, who instead granted favour to the rival church of Trithereon. Matters with the gnomes continued to escalate to the point where they effectively seceded from the viscounty altogether, and within the year war suddenly loomed. So it was that when Fenward Left-Handed was implicated as an agent of the Scarlet Brotherhood and subsequently slain by his own Captain of the Guard when he resisted arrest, the people of the land let out a sigh of relief and looked with uncertainty to Castle Greyfist. Lady Elysia was popular among the people, but she was left as a doubtful heir owing to her status as WIlfrick’s adopted daughter rather than his own blood. Moreover, she was a Furyondian by birth and marriage prospects, and a female to boot, which did not at all sit well with some of the more backward nobles and clergy heads of the land.

Bishop Haufren then stepped forward with documents proving the existence of another son by the late Wilfrick’s one-time elven paramour, and the half-elf would be dragged from his simple life on the Gnarley fringe to take the viscount’s throne. Owing to his station and the confirmation that the documents were in the hand of the late viscount, the nobles reluctantly endorsed this Langard of the Gnarley Border, and the judges of the Viscounty of Verbobonc proclaimed him as their new lord. For her part, Haufren saw that Lady Elysia was given a settlement in land and gold to enhance her dowry, then quietly shuffled off to her fiance in the Duchy of the Reach.

Thus far Langard has been an uneasy lord, more at ease riding or hiking in the hills and woods rather than issuing noble decrees. He faces great challenges returning the gnomes to the fold and earning the true acceptance among his vassals, qne the young viscount has his work cut out for him. Even so, his work might be eased by the fact that his humility, charisma, and exotic good looks have made him wildly popular with his people. Langard is also grateful to his sponsor and quite willing to take the advice of Haufren in most matters. Once more the Bishop of Saint Cuthbert has served the memory of his dear friend WIlfrick, and once again the church of the Cudgeller is preeminent in the land.

Oscar Scarlord was raised in a Cuthbertine orphanage in Verbobonc City, and although the young clerics Calmert and Winfred saw to most of the childrens’ needs, the bishop took a personal interest in his development when it became clear that he had the potential to be a potent channeller of divine magic. Although he rarely gave Oscar a kind word himself, those who excessively bullied the scarred boy from Nulb often felt the back of the bishop’s hand for their cruelty. In due course, Haufren saw that the youth gained a good understandings of ethics, dogma, and the finer points of delivering a cudgel unto the heads of the foolish. It should be noted that although he is of advancing years, and considerable girth, he is still handy with the use of cudgel and mace, and not at all backwards about being forwards in their use on the training field. The bishop keeps himself fit by practicing the Exercises of Arndt each day, and he taught Oscar and several other worthy candidates how to perform the disciplines as well.

All said and done, Bishop Haufren is well-pleased with Oscar’s talent and dedication, and although the lad would enter the ranks of the Order of Billets rather than his own Order of the Stars, he watches the progress of the young cleric with a kind of paternal pride. 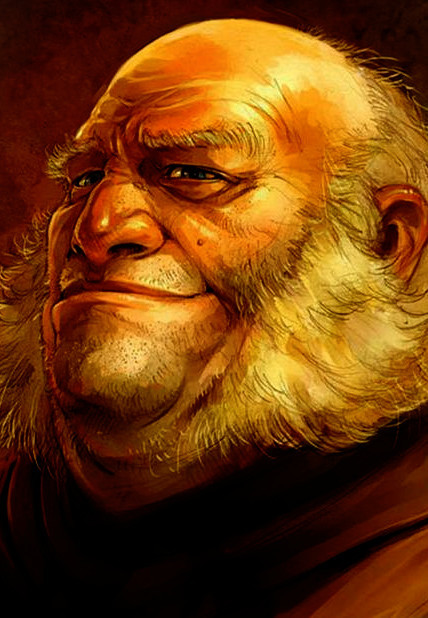