A retired Companion Guard of Celene, this wood elf was the mother of Haemir Hellbrand. In 584 CY, she was slain defending the Welkwood and Gnarley Forests from the Pomarj invasion.

A wood elf female, dark of hair and eye, and obviously taller and stronger of arm than most of her kind. She commonly wore a short tunic, leggings, boots, and a thistledown cloak, and carried no weapons other than a dagger. At such times, the battle scars on her arms were obvious. When on patrol or girded for battle, she protected herself with leather armour bearing the arrow motifs of Clan Meldarin. At such times, she was armed with an impressive elvencraft bow and a longsword.

Ienre Lafkel, known better among the Rangers of the Gnarley as Ienre Moonsong, was a ranger and wizard of the Wood Elves of Clan Meldarin. She appeared to be youthful, as is typical of all her folk, but her son Haemir knew her to be over two centuries in age, and steeped in experience from several human lifetimes of training and war-making. A master of the bow, the sword, and the spear, although it was the first of those weapons that she favoured, she was one of the most skilled warriors throughout the entire expanse of the Gnarley. Ienre was considered a leader among her clan, and although she ostensibly retired from actively defending their lands when she married the human known as Shaman Hellbrand, she was always ready to step forward in times of need.

In her prime she was a member of the elite royal regiment known as the Companion Guard of Celene, and she taught Haemir something of their fighting style when he was old enough to learn. having spent more than sixty years at the capital of Celene, where she learned more than a few tricks of the courtiers of Enstad, she could display a measure of charm when it served her purpose. This diplomatic nous served Clan Meldarin well in her later years, as it assisted in creating an informal alliance with the growing organisation known as the Rangers of the Gnarley. It is known that Ienre was a veteran of the Hateful Wars of 498-510 CY, as she is notable as being numbered among the elven heroes of the Battle of the Briars in 509. This vicious conflict, fought over a ford in an elbow of the Crystal River in the northern Suss, exterminated thousands of desperate Goblinoid warriors of the Lortmils who sought to cleave an escape route into the boughs of that dark forest. Elven clerics, druids, sorcerers, and wizards used their magics to raise great walls of stone, thorns, and briars to trap and funnel the enemy, nearly all of whom were then picked off by spell and arrow.

Ienre’s frequent congress with the Faerie Folk of the forest was well known among her people as well as the local rangers, and she was a long standing initiate of the Fae Mysteries. She was often found practicing the sacred fey rites with the Dryads of the Fern Trees, and her leadership brought many of the Wood elves of the clan into the mystery cult as well.

She loved the brooding and obsessive Shaman with all her soul, and she never forgave him for abandoning she and Haemir to seek out his enemy (and one-time friend) Shoon. He disappeared following his quarry in the Iron Wood of the Viscounty of Verbobonc in 580, and although she was resentful, she missed the ranger terribly for the balance of her remaining years. Haemir was her deepest comfort, as was the constant fellowship of her cooshee companion, Feratae, and her squirrel familiar, Rualari.

When the Orcish Empire of the Pomarj invaded the Principality of Ulek, the northern reaches of the Suss Forest, and the Wild Coast, Ienre was one of many elves of the Gnarley who answered the call to defend their lands. Although the Kingdom of Celene closed its borders and refused to waste elven lives in defence of their neighbours, a number of the forest clans did their part to protect their lands as a matter of course. Ienre and Haemir fought a number of goblinoid and orc bands on the Gnarley and Welkwood fringe, and it was in one such fight not far from Oakvein that she lost her life in battle with the Orcish chieftain known among the elves as “Three Arrows.” She was deeply mourned by her son, her clan, and the dryads. Amid paeons dedicated to her bravery and her generosity, Ienre was buried in a barrow deep in the forest. Feratae and Rualari continue to make their homes nearby, so that they might continue to watch over her. 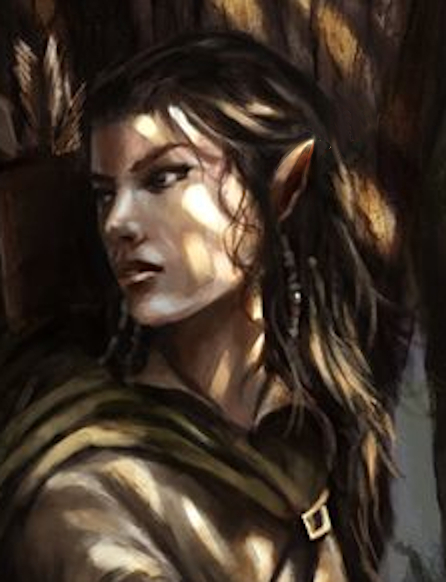