One of the most powerful vassals of the viscount, this noblewoman is also one of his most loyal. She is as yet unmarried, and many suitors seek her hand owing to her beauty, station, and wealth.

A young lady of both human and elven blood, dressed casually but stylishly in a fusion of fashions from the Viscounty of Verbobonc and the Duchy of Ulek. Her unruly, curly red hair is cut tomboyishly short, and the young lady possesses an otherworldly beauty, with her dazzling forest green eyes and a dusting of light freckles across her fine cheeks and pert nose. She is remarkably graceful in her movements, appearing poised and unruffled no matter the circumstance, and she projects an air of authority well beyond her years. The badge of a rampant tiger on a field of green bordered by gold, is worn prominently on her coat and on her cloak. 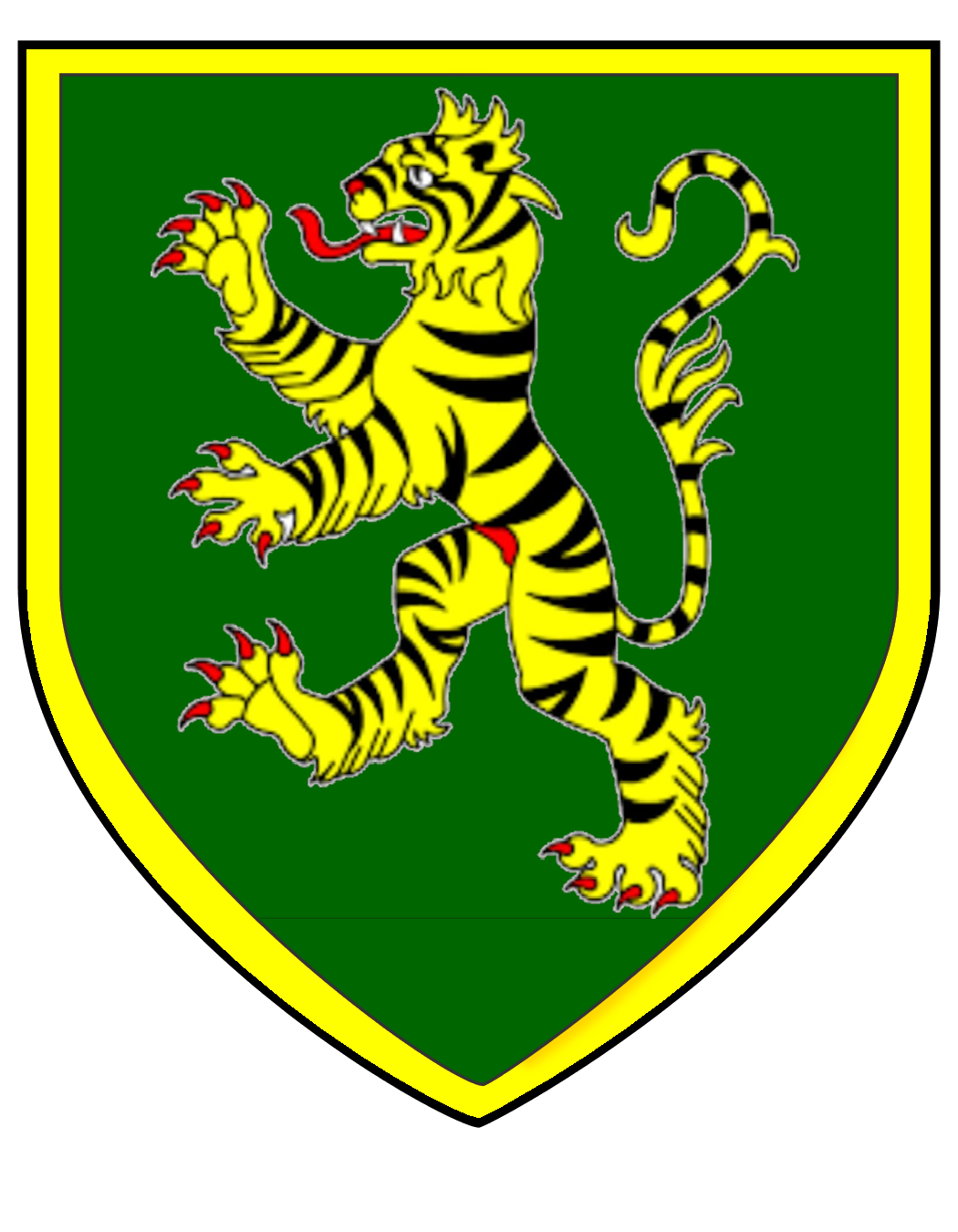 The coat of arms of House Stefania. The field of green symbolises hope, joy, and loyalty in love while the tiger signifies valour and ferocity in battle.

It is said that her ancestor, Jodan Visengart, was a ranger and great explorer of Aerdi antiquity who was chartered by the crown to explore the vastness beyond Lake Quag in search of a northern pass beyond the Yatils. He mapped what is now known as the Yecha Hills and in 53 CY even reached the misty shores of the Dramidj Ocean before returning to civilisation with a streak of tiger cubs. The largest of them, Tenmer, served as his companion and for some generations the family bred tigers for the court of the Overking. Such was the source of their ancient rise in station and great wealth, both of which led to their appointment as marcher lords for the old viceroyalty of Ferrond.

Her Prominence, Lady Mirabella Stefania, 12th Marchioness of Visengart, is one of the wealthiest and most influential nobles of Verbobonc. Visengart is among the oldest domains in the land, dating back to the early years of the Viceroyalty of Ferrond when a prominent, aging explorer was granted extensive lands in reward for his long service to the Aerdi crown. Visengart was established to guard the fertile Verbobononcian plain from the dangers of the Iron Wood, and it fulfilled that role for many years before her ancestors’ power was diminished through war, misfortune, and a failure to correctly gauge the prevailing political winds as the Kingdom of Furyondy emerged from the old viceroyalty. Technically, her title outranks that of her superior, the viscount, but in owing to the vagaries of Oeridian feudalism her actual station is closer to that of a baron, hence her term of address.

Mirabella’s land is bounded by the Caleb’vara in the west, the barony of Augustin in the south, and the Rhynehurst lands to the north and east. She was the only child of Cranston Stefania, the 11th Marquis of Visengart, and Endamia, the daughter of a vassal of the Duke of Ulek. Before his passing in 586 CY, her father was noted for his stalwart support of Viscount Wilfrick and her mother, although she has recently returned to her home in the west, was known for her free and joyful manner, stylish ways, and fey elven beauty. Endamia left her mark on Visengart through the influence her elven culture left on the language, fashion, and manner of its people, and her legacy remains strong throughout the land whether it be among humans, halflings, or centaurs.

Lady Stefania takes very much after her mother. She prefers to be found among her people, and is just as comfortable in the local inn as in her private chambers. Although she is quite formal with strangers, she is not stuffy or pompous, and that is re­flected in her easygoing attitude. Every man, woman and child in the immediate vicinity of the town of Visengart is known to her on a first name basis whether they be man, centaur, elf, or halfling. In private conversations with her people, Lady Stefania prefers to forgo her title and be simply known as Mirabella.

It is a source of some consternation to her subjects that the lady is nearing the age of thirty but is as yet unwed. In truth she would be happy to go for a good number of years yet before entertaining the notion of marriage, and with her elven blood she could probably stand to do so. However, with the example of Fenward and Langard of the Gnarley Border before her Mirabella has come to understand that instability of succession breeds instability and disloyalty. Thus she has recently made it known that she is accept­ing gifts for the honor of courtship. However, all suitors must be approved by her father’s formal captain, who is Lady Stefania’s closest friend and confidante. Captain Daghris is a keen judge of character, and he gives short shrift to the unworthy.

Despite the obstacles presented to those who would win her hand, Mirabella is the most eligible of the three great unwed ladies of Verbobonc. Despite her great beauty Elinor of House Asbury has almost nothing to offer for her dowry save worry and debt, and Kathryn of House Sarcina is swiftly leaving her child-bearing years behind. In contrast, Lady Mirabella rules over a prosperous, fecund land, and she has yet to truly enter her prime in more ways than one. Furthermore, she and her cousin, Mahris, are the last of the Stefania line and since they are not male, the family name ends with them. As such, any scion of a great house that secures her hand would win great power in the viscounty. Privately, some hope that Lord Langard himself will offer suit to the lady, for it would do much to secure his throne in an uncertain time.

Lady Stefania is well-advised by agents who served her father long before she inherited her station. In addition to Captain Daghris, the diligent and practical halfling squire Golbanion of Littleburrow serves as her seneschal, handling much of the serious business of the land. Erkenbrand, her herald (who hired the Silver Spear on her behalf) minds her interests at court and in the capital, while her butler, Sir Gerret, one of the finest in the realm, has served her family faithfully through three generations. Even her informal house wizard, the elf Gallantris, has advised her family for more than thirty years.

Gallantris, a high elf mage of the Duchy of Ulek, who advises the lady on magical matters.

The Company of the Silver Spear had the pleasure of making Lady Mirabella’s acquaintance after they successfully dealt with the undead raids that had been pressing the southern reaches of her lands. Having brought down the necromancer Vandros and recovered certain letters pertinent to the rise of a new threat arising in the Gnarley and Welk verges, the lady was pleased to meet them and take possession of those pages so that they might be transferred to the viscount. She ensured that copies were made for them, saw them paid a generous bonus, and promised to have their names spoken in Viscount Langard’s court. 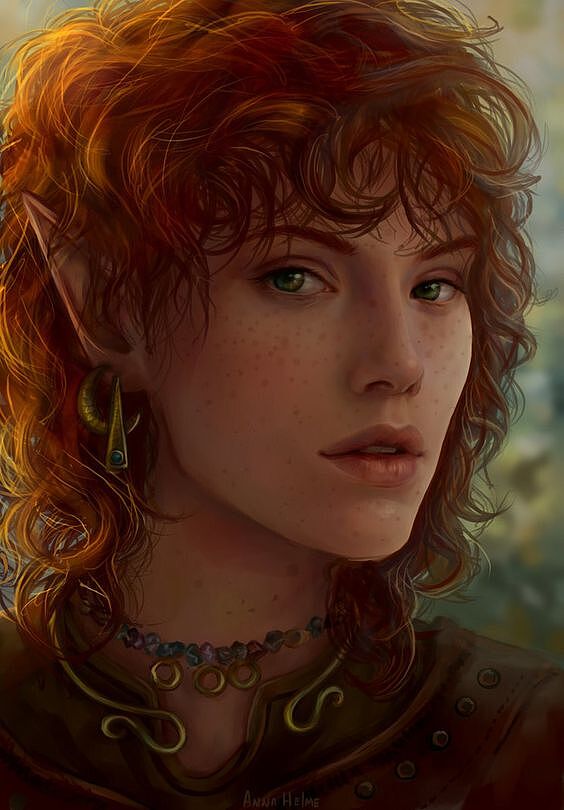