An erratic but apparently harmless old goblin slave who was captured (or rescued, as he sees it) by our heroes. He is apparently a builder, healer, trapsmith, and shaman who worships "the mother of mushrooms."

The party first encountered this old, crazy goblin at Hightower Tor, when they espied him from afar tending to the wounds of Haemir Hellbrand, who had been subdued by the hobgoblin scout they came to known as Lezjku-kon Rekla. Another hobgoblin, tall and thin and swathed in grey robes, stood over the little goblin possessively and when hostilities with the goblinoids were renewed, both spellcasters retreated inside. Later, having cleared the ground level of the old fortress and recovered the magic box for Aristocles of Niole Dra, the party set about finding them. This would necessitate a perilous climb up the collapsed central stair-well of the Hightower.

The goblin was discovered to be hiding inside a chest on one of the upper levels. Seeing their bared weapons and grim expressions, the ancient, portly little thing cowered and wailed in rather good common, “Don’t kill me! I surrender! I surrender! Lezmul yields!”

Throm forced the cowering goblin out of the chest and on to his belly, demanding to know where the hobgoblin in the robes had gone. Lezmul did not struggle, and indeed he seemed happy to be found, once it was clear they would not immediately slaughter him.

“Thank the Mother of Mushrooms! Praise the mushroom! Lezmul is saved. You have saved me. Mighty heroes have saved Lezmul!” He spat on the ground then. “Rezlar-kon Gyfdar of the Severed Tongue Clan is the one you seek! He is my master and I am his slave. But he flew away and left me here. He is gone and I am free!”

The party was suspicious, but did not see the old, odd little goblin as much of a threat. When they ask what he meant, at length Lezmul explained that he is a simple mushroom farmer, builder, trapsmith, and devotee of the Mother of Mushrooms, who came to him in the “mushroom dreams.” He was a slave to the hobgoblins like all of his tribe, and he was brought to this place because he was expected to plan and implement the rebuilding of the staircase that would open up the fortress to goblinoid occupation.

He declared with considerable pride that he is the best builder in all of Maelgor, the Underoerth settlement whence he and masters hailed, because the Mother of Mushrooms had shown him how through the Avin’bwael. Looking shrewdly at Ruprect’s eyes Lezmul then said, “you know the Doomgift, I see. Does the Mother of Mushrooms speak to you?”

Lezmul appeared to be quite happy to be the prisoner of the party, it would appear, for he was much older than most goblins ever grow, and it was only a matter of time before he was too frail to work and he would wind up in the stew pot for the hobgoblins. He did not want to go back to Maelgor, which apparently lies fourteen days away, though he studiously only counted ten of them on his fingers and thumbs…

When asked about the gourds that hung on his belt, which matched some of those taken from the enemy, he proudly claimed that the Mother of Mushrooms showed him how to brew them. As such, he calls the potions “Mushroom Gifts.” He knows how to make healing potions, “not-there” (invisibility) potions, “strong” (bull’s strength) potions, in addition to a variety of tasty mushroom libations and curatives. Lezmul also offered to cook for the party, pulling a bewildering variety of fungi out of his little sack and elaborating upon the texture and taste of each. Trust in short supply, they turned him down.

The heroes ultimately decided that Lezmul was fairly harmless and well-meaning, and they elected to forego butchering the odd goblin. Instead they decided that they would take him to Aristocles, who ought to be interested in the tales the old slave has to tell, and more empowered to get to the bottom of those stories. 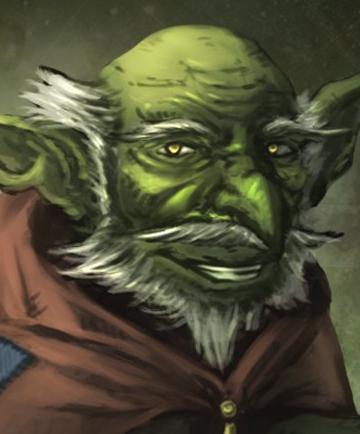