A bar maiden who works at the Inn of the Welcome Wench, this pretty and winsome young woman could almost be the wench for which her eponymous workplace is named.

A comely young lass of Hommlet, mostly of Suel descent but for her warm brown Oeridian eyes and the ease with which her skin tans under the Verboboncian sun. Her long blonde hair is worn loose, and she appears fond of wearing low-cut dresses to show off her ample cleavage, and she has a way of sashaying her way through the ranks of the patrons of the Welcome Wench, drawing their eyes while simultaneously dodging their hands.

Marla smiles easily and laughs often, for she is happy working at the Inn of the Welcome Wench where she meets no end of interesting travelers. Her head is easily turned by a handsome face, a quick joke, or tales of far off, wondrous lands and sights. It would appear that she adores men, is more than fond of ale, and loves to carry a song. She is Vesta’s best friend, and while the daughter of Ostler and Glora is the mind and soul of the inn, it is Marla who is its heart. On any given day she hums her way through her duties at the very least, and when a passing bard sings a local favourite, she is quick to lead her neighbours in belting out a song.

At present, she is involved with the paladin known as Xaod the Slayer. The two carry on a not-so-discrete fling in her off-hours, for the gormless Furyondian and the carefree bar maiden both lack the subtlety to hide it. Her free ways draw the odd disapproving from from Glora, and the occasional theatrical sigh from Ostler, but neither of them have the heart to censure Marla for her wanton ways. She is almost like a daughter to them, and after all her attitude is good for business. 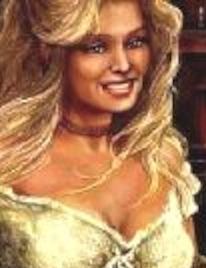