A serene priestess of Rao whose wisdom is much valued in the councils of the mighty, this quiet woman was a close companion of the late wizard known as Ringlerun. She is active in the courts of Mitrik and Chendl.

A tall, slender priestess aging gracefully into her middle years. She has a serene beauty with her calm, watchful chestnut eyes, her delicate features, and the wholesome, gentle light that seems to emanate from her. Her blonde hair is bound up, held by a golden band set with diamonds. The holy symbol of Rao is worn at her breast, and she wears raiments of white and pale blue, with a fur cloak against the cool of the night. The priestess is armed with a dagger at her belt, and a long handled mace that almost resembles a ruler’s sceptre.

Like her old friend Ringlerun, Mercion is not native to the region, but she has quietly haunted the courts of Veluna and Furyondy for decades. She cuts a notable figure in either, for her blood appears to be almost purely Sueloise. This has raised speculation that she must be from Keoland, the Lordship of the Isles, or the Hold of the Sea Princes, but her faint accent is such that she must be from even farther afield. Indeed, in lands rendered paranoid by the machinations of the reviled Scarlet Brotherhood, her meddling might result in accusations of sympathies with sinister groups if it were not for the great regard with which King Belvor IV and Canon Hazen so obviously hold her. It is also noteworthy that despite more than thirty years of a notable presence in the public eye, she shows barely a third of that time on her features.

Mercion is a skilled practitioner of divine magic, but despite her many years in service to the god Rao, she is not so mighty as some in the land. She seems unconcerned, for her true gift is in using her gifts to perform as an envoy for Canon Hazen. Acting as a roving diplomat, Mercion is frequently on the move, smoothing feathers ruffled by the rather high-handed aid that Veluna offers to her beleaguered allies. Her common hearth wisdom, gentle sense of humour, and serene composure allows her to do far more in this role than any number of more accomplished spellcasters could ever hope to accomplish, and it is this facility that has made her so welcome among the rulers of the land. The one matter in which she failed to win the day was that of Ringlerun’s disgrace, for until the Greyhawk Wars King Belvor would not forgive the old mage’s unwillingness to divulge all his secrets to the crown.

During Ringlerun’s exile from court, Mercion was sometimes a visitor to the Windchester estate (among other locales), where she sought the old wizard’s counsel on matters arcane. At such times she would dine with her hosts, and although Ruprect was still very young, she seemed to take some delight in his wit and intelligence.

She would also stand with Ringlerun and her other old friends, Figgen and Elkhorn, during the terrifying Siege of Chendl, when evil clerics, wizards, and hordes of demons, fell men, undead, orcs, ogres, and goblins assailed the capital of Furyondy. During the final assault on the walls led by High Priest Patch, she was at the old wizard’s side. She was seen to cast a blade barrier spell to hold off the enemy while he prepared for his suicidal retributive strike, and a Word of Recall to whisk she, Figgen, and Elkhorn to safety a bare moment before the explosion issued forth, taking the lives of both her friend and the most powerful of the Old One’s servants. 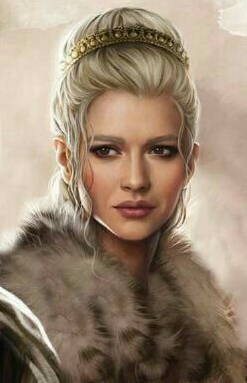