The genial innkeeper of the famed Inn of the Welcome Wench. He is a reserve sergeant of the militia, an elder of the community of Hommlet, and a much loved neighbour.

An older man with weathered features, this innkeeper is tall and straight, and still boasts a husky build despite his years. His dark, curly brown hair has receded just beyond the crown of his head, but he has a thick, full beard, free of the grey one might expect for his years. Like any other common villager the innkeep dresses in a white tunic, heavy wool trousers, simple leather shoes and a wide leather belt. He is armed with a belt knife.

Friendly in a dignified sort of way, Ostler welcomed the Company of the Silver Spear to the Inn of the Welcome Wench, but quickly ceded the management of their comforts to his busy, no-nonsense daughter Vesta. He made polite small talk when he was approached for a drink, happily talking up the virtues of his beloved Hommlet but giving away little gossip and quickly steering the conversation back to the quality table of fare and the glorious traits of his drinks menu.

It would appear that Gundigoot and his wife settled in Hommlet not long before the “elemental troubles some thirty year ago,” and that they were one of the first Cuthbertine families to do so. He claims that during the troubles, when the village was firmly under the boot of the Temple of Elemental Evil as they expanded their grasp across the eastern viscounty, the Inn of the Welcome Wench was the locus for the village resistance effort, and the senior leadership of the militia continue to meet at the inn on one night each week to discuss matters of import to the security of Hommlet.

In getting to know the villagers, the adventurers learned that he was a long-serving sergeant of that militia as well, but now Ostler Gundigoot is now just a reserve member. Apparently his health is not what it once was, so despite his obvious strength he instead offers up the benefit of his experience and wisdom. His wife Glora and daughter Vesta will accept nothing less, even fussing about him and telling him to “take it easy” even behind the bar.

For his part, he seems content enough to be hen-pecked a bit. Ostler Gundigoot seems a happy man, blessed with a beautiful and intelligent wife, a clever and hard-working daughter, a successful and even famous business, and fine neighbours. Every night he pours drinks, tells jokes, polishes bottles and tankards, and enjoys himself. And everyone seems to think he has earned the right to do so.

When the village elders meet, Ostler’s word is respected and courted. He counts Elmo, Hroth, and Calmert among his best friends, and does his best to smooth over tensions between adherents of the new faiths and that of the old. Over the course of the years he and his family have also befriended scores of adventurers, not least among them the heroes who humbled the Second Temple of Elemental Evil and the famed Band of Seven Songs, and no few of these worthy souls stop in to visit on their interminable travels. 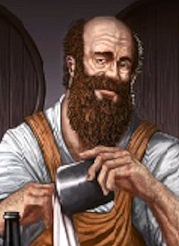