The Keeper of the Forge and High Old One of the dwarven settlement of Yurjax, this ancient dwarf is the spiritual mentor of the Paladin Throm Mushroomhead.

A venerable Mountain Dwarf wearing the holy symbol of Moradin the Dwarffather. His frame suggests that he was once prodigiously strong, but age has devoured his strength and vitality. His beard and the remnants of his hair are snowy white, and a pair of spectacles is perched on his nose. He walks with the assistance of a gold and silver plated staff that bears a wholesome blue flame.

As the High Old One and Keeper of the Forge of the Dwarffather’s Light at the stronghold of Runehold (called Yurjax in the language of the dwarves), Pargrem Holyfire has mentored many young dwarves of Clans Shatterhammer, Splinterstone, and Shieldstone. He is more than three hundred and fifty years of age and he remembers well the times of the Principality of Ulek as a vassal of the Kingdom of Keoland, the disaster of the Short War, and the fury of the Hateful Wars. In addition to serving as a spiritual elder for his community, he married at Runehold and raised his family there, and his descendants stand as pillars of the community. Few are accorded more wisdom or craftiness in all of Ironhelm Province, and as such Pargrem has been a profound spiritual influence on the equally unusual young paladin known as Throm Mushroomhead.

Except for his years as an acolyte at the Temple of the Blue Mines in Havenhill, he has spent nearly his entire existence as a priest at the Forge of the Dwarffather’s Light. In his youth he was considered a great weaponsmith of prodigious strength, and while the power has fled his limbs for the most part, he retains his secrets of forge and rune. He is also the keeper of the Light of Moradin, a relic of his faith that is said to be able to grant its wielder the ability to pierce any deception, both mundane or magical, and to find the secret ways of stone and heart. Legend has it that in the past, mighty wielders of the relic have been able to project a blast of holy fire from the lanthorn, which some believe comes directfully from the Soul-Forge of Moradin. Pargrem has never had cause to take the relic into battle, though, and owing to his advanced age his people would likely refuse to allow him to do so. 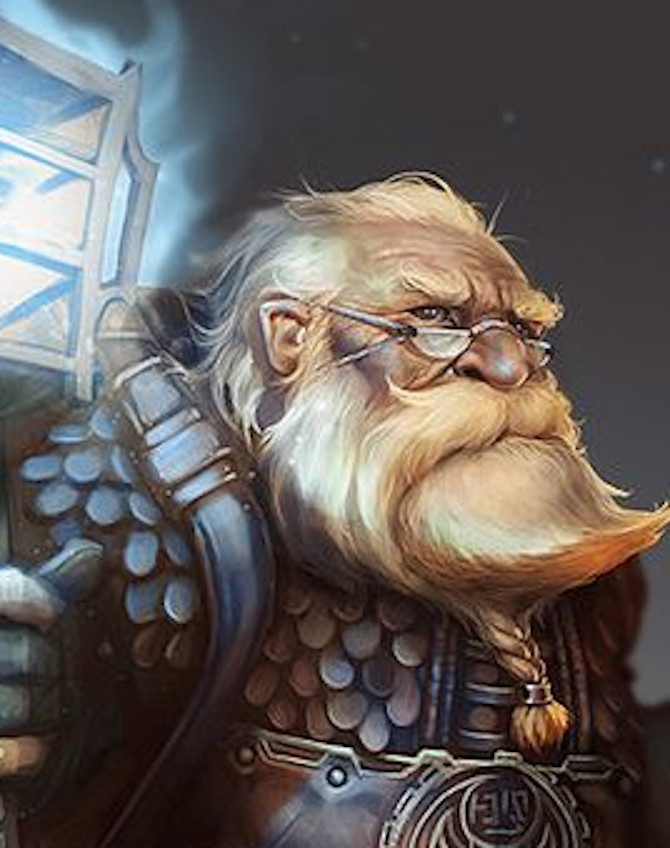