The Ranger Knight of the walled village of Corustaith, deep in the Gnarley Forest. He is the mentor of Haemir Hellbrand.

A tall woodsman around fifty years of age, who looks strong, fit, and ready for action despite the advance of time. His dark hair is still thick, though dusted with grey, and more than a little salt and pepper has found its way into his beard in recent years. He wears leather cuir bouilli, finely made and tooled with motifs of oak trees and acorns, but his cloak and boots are clearly of elven make. He is armed with a bastard sword, a long hunting knife, and a longbow. A quiver of arrows displaying exotic fletching hangs from his baldric.

The Ranger Knight of Corustaith has seen a little over fifty years. Born and raised in a homestead in the central Gnarley, close by the territory of the elven clans of the Meldarin and the Sherendyl, he adventured widely after completing his apprenticeship to the Ranger Knight Arion Blackbrow. In his youth, one of his mentors was the foreigner who called himself Shaman Hellbrand, and Parsimmon’s fighting style very much echoes that of the older ranger, who has since vanished from the forest. After taking his fill of the wider world, he and his younger brother Cedris returned to their home and became pivotal to the maintenance of Blackbrow’s stronghold at the village of Corustaith. With Cedris’ careful management, the settlement grew, as more and more woodsfolk seeking security asked permission to build there. The village of Corustaith grew quickly.

Eventually, the aging Arion Blackbrow decided to retire, and he nominated Parsimmon as his successor. Other rangers came forward to support him and swear their loyalty, and in 571 he became a Ranger Knight. Eventually, a palisade was erected, an inn, mill, and smithy built, and Corustaith became known as the best place one can go to petition for a meeting with the leadership of the loose fellowship of the Rangers of the Gnarley Forest.

From 583 CY, Parsimmon repaid the good instruction of Shaman by taking on his son, Haemir, as one of his own apprentices. The young half-elf considers Corustaith to be as much a home as that of his late mother’s domicile in the Meldarin lands. 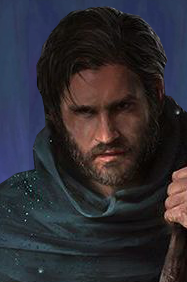