A bard of the Duchy of the Reach in the Kingdom of Furyondy who fell into the orbit of our heroes. He followed them for a time in hopes of making new songs out of their adventures.

A young, soft-featured man, clearly an itinerant musician judging by his sturdy boots, travel stained midnight blue gambeson, a faded, much-patched cloak that was once crimson but is now closer to orange, and the lute that he cradles like a babe. His long, light brown hair is worn loosely bound, and he keeps his full beard in good order. He is armed with a rapier and a dagger.

First encountered by our heroes during their own very first meeting at the village of Eglath, Robin the Bard was entertaining the small crowd gathered in the common room of the Blue Water Inn. He seemed at the time to be singularly pleased at the arrival of these very intriguing strangers, so different from the farmers, fishermen, and tradesmen that were his regular audience. His attempts to impress them with his music seemed to fall on deaf ears, though, for they were more interested in various pieces of business all their own.

Undaunted, when they returned to the village almost a week later Robin took pains to introduce himself and inquire as to their plans. He explained that as a travelling minstrel he could not stay over-long in any one village, and that his meat and drink were tales of the exploits of doughty heroes such as they. Such tales he could set to music, and perhaps as his own fame rose then so might theirs. Candyce in particular was taken with the notion, and the handsome bard sweetened the pot further by revealing that after travelling rough for years, he had become a decent camp cook along the way. In need of such skills, with the insistence of Candyce and a touch of the camp runs on account of a poorly cooked pig, the heroes agreed to take him on.

Robin accompanied them on the road between Eglath and Verbobonc City, entertaining them and the entourage of Lady Haxx and earning his keep by whipping up better than passable food. Claiming that his work had grown stale, he was pleased that Gamina could teach him a few new pieces, and he proved that he is indeed skilled in song and the use of the lute. All soon learned that he is not a complicated man. A native of the Duchy of the Reach in the southernmost reaches of the Kingdom of Furyondy, he had spent several years travelling back and forth across Veluna, Verbobonc, and the Gnarley fringe in a never-ending quest for action (apparently), riches, prestige, and women, in no particular order. Ultimately he wants to become famous, wealthy, and comfortable in the court of a generous noble, but not just yet.

He briefly took his leave to stay at the down-market Players Inn while they enjoyed the luxury of Jylee’s establishment on the tab of Lady Haxx, only to rejoin them on the business of Lady Asbury the following day. The heroes set forth with their new patron on the road to Penwick, but when they were attacked by brigands in the middle of the night, his allusions of being “tasty in a fight” proved to be something of a boast. He first cast an Invisibility spell to avoid several of the enemy, then he was swiftly disarmed when he did enter the fray, and it seemed that he survived only by the intercession of the aging Armount, seneschal of Asbury. Candyce, who had shown him favour up until that time, was deeply unimpressed with his poor showing and roundly belittled him after the fight.

Her scorn led the amorous bard to seek the rehabilitation of his image in her eyes, and throughout their adventures in the Fens of Tor, the southern hills of the Barony of Augustin, and the quest to defeat Vandros the Necromancer, and the fight to protect Sheernob from giants raids, he strove time and again to protect Candyce and do his part to stand equal with the rest of the band. Robin’s mishaps continued to abound in battle, but his capacity to lift morale and fire the blood of his fellows through song and speech was much appreciated, as was his (albeit minor) capacity to perform as an ancillary healer, a boon to which Candyce was the beneficiary more than any other. In due course, he gradually won over her affections, at least to some extent.

After the Battle of Crooked Ridge, and yet another close call, it became apparent that the course of the Band of the Silver Spear was clear. They must do what they could to counter the rise of the Temple of Elemental Evil once again. Robin ventured that his use to his friends was to travel the viscounty, practicing his trade and gathering information concerning such figures as Ash, the Black Elf, Seguryn, the Fox, and the Scarlord. In so doing he would also sing the songs he had composed of the band, thus improving their own reputation in the bargain. The rest of the heroes agreed, and the bard set out a few days letter.

As he left, Candyce favoured him with a kiss, lifting the bard’s spirits immensely. He set out on the northern road ahead of them, a stupid grin on his face and a spring in his step. Doubtless, his path will cross that of the Band of the Silver Spear sooner rather than later… 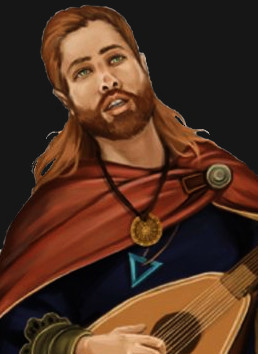