Master of Archers of the Penwick militia, this retired adventurer also serves Lady Asbury as her huntmaster.

A handsome Oeridian man in his early thirties, clad in expertly crafted leather armour and armed with longbow, a hunting knife, and an arming sword that would very much look at home in the scabbard of a knight. He has the classic look of the hero presented in bard tales; his mien is grave, his jaw square, his brow strong, and his movements quick and self-assured. A shaggy, black-furred wolfhound follows at his heel wherever he goes.

Together with his wife, Meleny, this skilled hunter and archer provided assistance to the nascent Band of the Silver Spear on their quest to find the Skull Cave of the Fens of Tor. Neither he nor his wife were terribly eager to endanger themselves directly, citing their responsibilities to their children and the village of Penwick, but Roland did serve the party as their guide to the swamp, and he cared for their horses in the sheltered lee of a rocky hill while they ventured into danger. Unlike Meleny, who was somewhat wistful of leaving behind their carefree adventuring days, the ranger seemed happy with his lot, and considered himself a father and husband first, a servant of Lady Asbury second, and anything else not at all.

It was not always this way for him. As a youth, Roland sought to make use of his exceptional talent as an archer to make his way in the world as a warrior, and even harboured dreams of one day finding his way into the ranks of the Gnarley rangers. Eschewing the quiet life of a farmer, he took to the road and soon found himself among the Company of the Wolfhound, a troupe of adventurers known for their trained canine companions. After cutting his teeth on the Gnarley verge battling orcs, goblins, and bugbears, he settled into his role as a junior but valued member of the company.

In time their road took them to Hommlet, where adventuring parties were gathering to fight the resurgent Cult of Elemental Evil. Some of those other bands were peopled by great heroes, and while the Company of the Wolfhound did their bit, they did not serve in a vital role in the final assaults on the Second Temple. That didn’t bother Roland so much, though, for he was far more interested in the blue eyed, auburn haired druid of Hommlet that had taken to tagging along on their adventures. He had caught her eye too, and it would not be long before he successfully approached her father, Filliken, seeking her hand in marriage. The farmer’s bride gift was a family heirloom, a magical sword with holy properties that would serve Roland well in the fight against the cult and a myriad of foes in the years after.

After the Temple of Elemental Evil was destroyed for a second time, the Company of the Wolfhound moved on and enjoyed further adventures for six more years before Meleny announced to him that they were expecting a child. Somewhat reluctantly, they bid their friends farewell and returned to Hommlet and, after the birth of their son Kyp, continued on to Penwick when the druidic hierarchy approached Meleny to take up the grove there. He would receive a heroes welcome from his old neighbours, and his now formidable ability with a bow made him a natural instructor for the local militia. His hunting skill earned him a job offer working for Seneschal Armount and young Lady Asbury, and he entered her service as her huntmaster.

Fatherhood changed everything for Roland. He no longer craves adventure, and instead sees himself as a family man and a loyal vassal to his lady. His role is to bring meat to the table, to raise his children right, and to prepare the archers of Penwick for the next time trouble appears on the horizon. Whether that danger might come from the increasingly tyrannical Lord Millinous to the north, some monstrosity that bubbles forth from the Fens of Tor to the east, or bandit scum from the Gnarley verge, Roland stands ready to protect his family and his mistress. 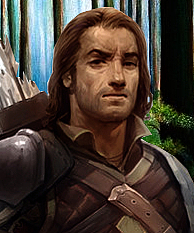