The Commander of the League of Right during the desperate Battle of Celene Pass, this humble and battle-weary warrior has been made Baron of the new domain of Passwatch. He is a kinsman of Throm Mushroomhead.

A middle-aged, battle-hardened dwarven warrior bearing arms and armour made in the distinctive style of his people. His helmet, plate, and mail bear the signs of mending from past battles, and his shield is new, painted with the axe of the Principality of Ulek marshalled with that of a tower on a hilltop. He is armed with a waraxe, a handaxe, and a dagger, all of matching quality and appearance.

Rourk is a career soldier, having served in the armies of the Principality of Ulek for more than fifty years. His first real battles were fought during the Hateful Wars throughout the years of 498-510 CY, but he spent decades afterwards serving among the Jewel and Suss border garrisons where he participated in dozens of actions against the bellicose and disunited tribes of goblinoids from the Pomarj. Whenever given leave, he returned to his clan lands in the north of Ironhelm Province, where he took satisfaction in training the younger dwarves in the use of axe, urgrosh, and hammer. Chief among his most ardent students were his second cousins Throm and Thorm Shatterhammer, and the former in particular showed himself to be a talent with axe and shield.

By 551 CY, he had grown weary of the soldier’s life, and so he retired from his post at the Jewel Garrison and returned to his people. Rourk hoped to find a wife, raise a family, and watch over his clan as a reservist in the army of Ironhelm. He continued to train Throm and Thorm and dozens of other reservists, and he found a match in Brylnys, a daughter of Clan Shieldstone. Years passed in bucolic contentment as he commanded the reserve of northern Ironhelm, close to the vital Pass of Celene as well as the border with the neighbouring province of Prinzefeld and the Crystal River, beyond which lay the forbidding, dark forest of the Suss. Rourk settled down, and hoped to remain that way.

Then Turrosh Mak and his bastards marched. The Duke of Ironhelm called a muster of his vassals, but the Graf of Prinzefeld was prevented from doing so before it was too late, as Mak turned much of his strength north rather than waste them on a costly siege of the old capital of Havenhill. The army of the Pomarj flooded the province of Prinzefeld, driving all before them as they stormed forts, sacked towns, and butchered or enslaved the inhabitants. Absent their strongest warriors who were away in Furyondy, the militias of dwarves, gnomes, and halflings put up a hardy resistance, but they could not stem the tide.

The force of orcs, goblins, hobgoblins, ogres, and evil men marched hard for the the Pass of Celene near the holds of the dwarves of Clans Splinterstone, Shieldstone, and Shatterhammer. Led by Graf Twembly the town of Rittersmarch made a stand to allow their weaker folk the chance to flee to the dwarfholds near the mountain pass or north to the gnomish territory of Treehome. The militia of Prinzefeld fought well, but they were unequal to their foe; routed, most of them fled for the pass while the Mak allowed his army to loot Rittersmarche. Grimly, as the first beaten warriors of Rittersmarch arrived at his position, Captain Rourk took stock of his forces, for no army would be available to stand before the hordes of the Pomarj other than he and the reservists under his command.

A number of the surviving, exhausted stragglers from the defeat at Rittersmarch elected to remain behind and make a stand with the local Ironhelm Reserve, as did a number of gnomes who had marched south from Treehome, some humans who had come east from the villages near Foghollow, and several adventuring bands who were in the area. However, the greatest surprise was a score of elves who broke from the orders of their queen and made their way from the borders of Celene.

The following is an excerpt from the History of the Greyhawk Wars by David “Zeb” Cook, available in full here:

The Battle of Celene Pass was bloody and hard-fought. The advance scouts of the League of Right (as the defenders styled themselves) had just reached a sharp bend in the pass when they sighted the first orcs, advance scouts like themselves. By order of Rourk Splinterstone of the Ulek dwarves, the scouting party, no more than 200 strong, piled up a hasty barricade of dirt and stone—a wedge-shaped redoubt along the far side of the pass. Realizing his command was hopelessly outnumbered, Splinterstone dispatched runners under the cover of night to both Celene and Ulek. Though the messengers risked the dangers of the pass, unknowing whether the orcs roamed there as well, those who remained faced a grimmer fate. If the messengers were slain, or reached civilized lands too late for relief parties to effect a rescue, Splinterstone and his men could do nothing save fight to the bitter end.

The first assault came under cover of darkness—a standard orc tactic. The attack was nothing more than a wild charge, an attempt to overwhelm the defenders by sheer numbers. Under Splinterstone’s cool command, though, the barricade held. Waves of orcs pounded the bulwark through the hours of darkness, only retreating with the dawn. The morning sun revealed a scene both stunning and horrifying: countless orc bodies lay in gory heaps before the rocky wall, as though adding their mass to the redoubt. The dwarven casualties, though far fewer, were still severe. Despite his troops’ dire need of rest, Splinterstone ordered a second and even a third wall erected behind the first.

For the next three days, the Defenders of Right clung to their rocky position against wave after wave of orcs and goblins. When the relief column from Ulek finally arrived,38 the grim troops were astonished to find Splinterstone and 30 of his men still alive, tenaciously holding the pass behind the last redoubt. The relief force’s commander had long since given then up for dead. For his bravery, Rourk Splinterstone received a small barony, and his troopers were gratefully pensioned for the remainder of their lives.

After the withdrawal of the Mak and his army, Rourk and the other survivors became heroes of the Principality of Ulek. Even more exhausted of conflict than before, especially since he had lost his beloved nephew Thorm in the battle, he nonetheless stoically answered once again to the call of his clan, his country, his duke, and his prince. The redoubt where he had chosen his ground to meet Mak and his army was selected for the site of a castle which would be the heart of his new barony, and by 590 CY the great castle of Passwatch was constructed. Colloquially, however, most of the folk of Ulek still refer to it as Rourke’s Redoubt. Almost equidistant between the settlements of Foghollow and Prinzefeld (which remains in the hands of the enemy), the fortification is charged with guarding the pass should the hordes of the Pomarj come again. The importance of the castle cannot be underestimated, for if Passwatch, Foghollow, and Thrunch were to fall, the Mak and his army could invade the breadbasket western provinces of the principality, and also raid liberally throughout the County of Ulek as well.

Baron Rourk has a reputation for being direct and demanding, but he is by no measure without kindness, tolerance, and generosity. His experiences during the Hateful Wars and the Battle of Celene Pass have showed him the efficacy of dwarf, elf, man, halfling, and gnome fighting together, and it has made him far more agreeable to their failings than other dwarves. Even the elves of Celene are welcome in his castle, provided they are not envoys of their queen, whose name is much blackened throughout the Principality of Ulek. 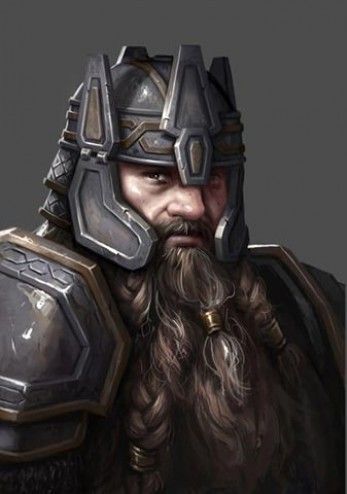