As co-lord of Hommlet and master of Doomwatch Keep, this warrior has the unenviable task of watching over the ruins of the Temple of Elemental Evil. He is known to be a skilled soldier, with a love of learning.

A slender warrior with a ropey, athletic build, clad in full mail and wearing an antiquated, distinctive open-faced helmet. He would appear to be a lord, judging by the badge of a castle and badger on a red field, which appears in several places on his garb of magenta and violet. A tan cloak is affixed by a great bronze brooch depicting the starburst of Saint Cuthbert. He customarily arms himself with a battle axe and a dagger, and when at rest his shield his kept slung. The warrior is middle-aged, clean shaven and good-looking, with few lines on his face despite his years. 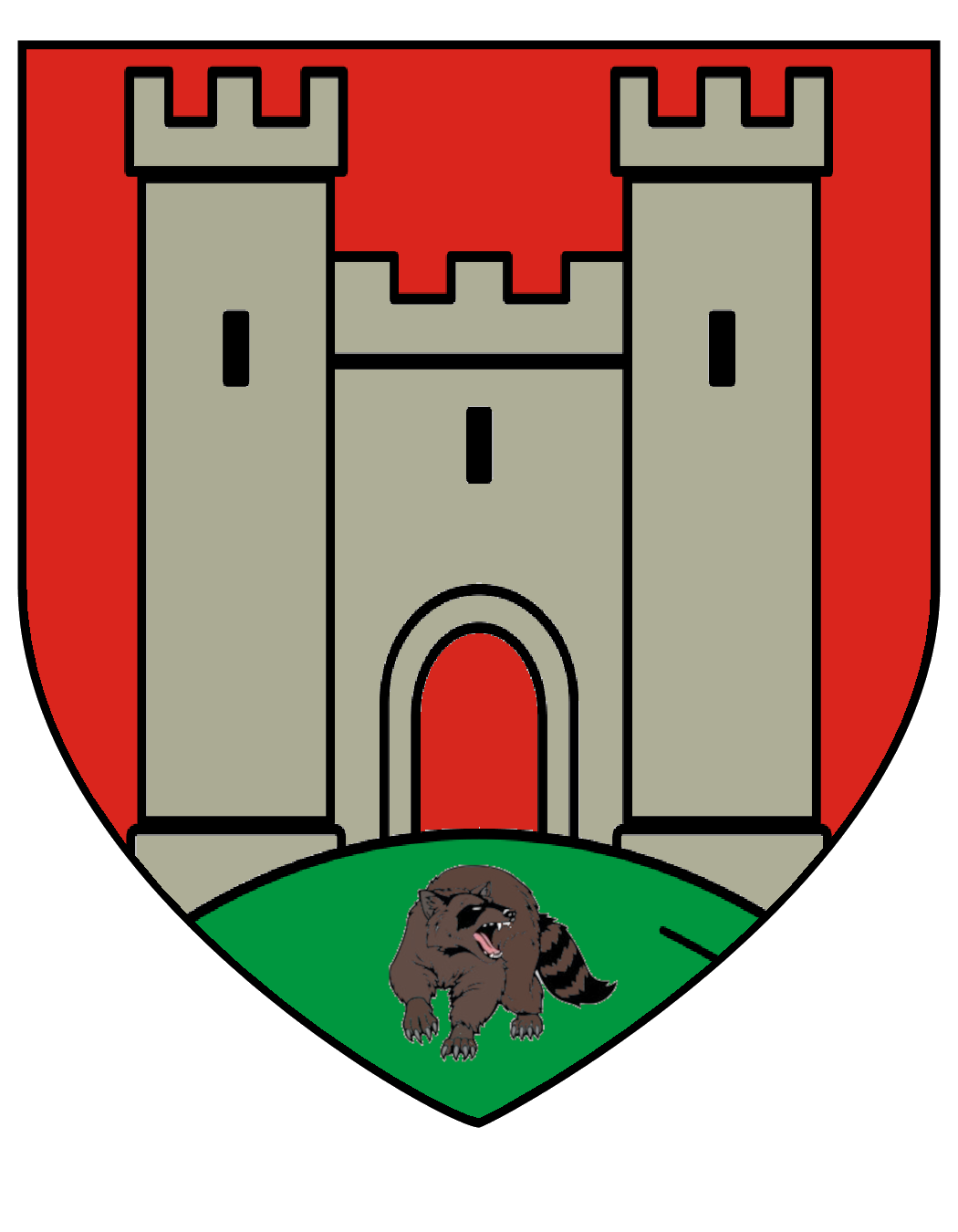 The coat of arms of Lords Rufus and Burne, both of whom have been recognised as the 1st baronets of the Lordship of Doomwatch, in direct vassalage to the viscount of Verbobonc. The castle represents, of course, Doomwatch Keep itself, while the red background indicates the legacy of blood, strife, and strength that led to its founding. The badger represents not just the tenaciousness of Burne’s men-at-arms, but that of all the folk of the area, who have prevailed against evil time and again.

Like his friend and co-lord Burne, Sir Rufus is a figure of growing legend throughout the eastern Viscounty of Verbobonc. It is said known he is a native of Verbobonc, where he was raised devoutly in the faith of the Cudgeller and given an education that would prime him for a life of service. As a youth he hoped to enter the service of Saint Cuthbert as a cleric but alas, he was found to have neither the temperament for it nor the talent to channel divine magic. Rather than be consigned to a lesser role, his pride led him to study the arts of war instead. In this, he discovered that his temperament was matched, and his talents apt. While he never lost his love and admiration for the written word, Rufus would have precious little time to indulge in it over the following years.

When rumours of the emergence of the first Temple of Elemental Evil arose to plague the lands of Verbobonc, Rufus was among a number of youths who resolved to stand against them. Among them would be Burne, a vain but talented wizard who would in time grow to be the warrior’s most stalwart friend and ally. Their determination to do something about the vile cult was steeled when the School of Elemental Magic was destroyed and Burne’s teachers slain.

Soon after Prince Thrommel of Fairwain marshalled an army from among the folk of Furyondy and Veluna to march to the aid of beleaguered Verbobonc. Rufus, Burne, and their friends were quick to join them. They would fight at Emridy Meadows and earn some renown for their bravery, though it was at the cost of all their lives save Rufus and Burne themselves. In the blood of that battle their bond was forged, and no one is dearer to the fighter than his brother-in-arms.

Following the downfall of the temple, they undertook several years worth of adventures throughout the viscounty, the Kron, a number of valleys and peaks of the Lortmils, and the Gnarley fringe. Owing to Bishop Haufren’s affection for Rufus, they were frequently employed as troubleshooters by the Church of Saint Cuthbert, but when at loose ends they simply wandered. Throughout the course of their travels they battled goblinoids, orcs, giants, and even vanquished a green dragon.

It was this last expedition that cemented their reputation, and soon an offer came for them to take up stewardship of a castle-building project in the village of Hommlet. The commune was considered to be a vulnerable weak point on the flank of the viscounty; closest to the ruins of the vile temple and its outpost moathouse, Hommlet was the likely lightning rod that would draw a future rise in banditry.

Feeling like this was what they had been waiting for, Rufus and Burne accepted the charge and got to work. It would take years to build the castle, of course, and it soon became evident that bandits were indeed drifting back into the area. An army of two, they undertook one foray after another to bring the miscreants down. It was during this time that the fearsome reputation of Rufus grew. He became known for his ruthless, efficient skill in battle and merciless attitude towards evil-doers. When one such group was subdued Rufus’ harsh belligerence was marked by the enemy, but when they were defeated an inspired Burne instead offered them a respectable job as his armsmen. Respect is a given, but to this day the men who would become Burne’s Badgers love the wizard, but they fear Rufus, for they know that unless his friend stayed the grim fighter’s hand they would all have died that day.

After the aged Kenter Nevets, Hommlet’s foremost village elder, passed away, and Rufus and Burne assumed lordship of the village as a fait accompli. They did this with the full acquiescence of the rest of the council and with the blessing of the late Viscount Wilfrick, and they have been known as the co-lords of Doomwatch ever since. Rufus was restless though, especially since the viscount and the bishop had long hinted that they had some task for him. His moodiness only increased, and while Burne took care to forge bonds of friendship with the villagers, Rufus cared only for the readiness of the keep and the vigilance of the Badger patrols. He chafed at being shackled to Hommlet when the Greyhawk Wars broke out, feeling that his axe was of more use in the north, but he held to his duty.

Finally, in 584 CY, the viscount called for Rufus and he took his leave of Doomwatch Keep and Hommlet. He is secretive regarding his activities over the following two years but it is known that he joined an expedition led by the famed hero and warpriest known as Renfrick of Loos. Few of their party survived the trials ahead, including Renfrick himself, but Rufus emerged victorious. He was knighted personally by the viscount for his trouble, and returned home to Doomwatch possessed of a calmer temperament and a readiness to settle down, at least for a time.

While Rufus is of equal status to Burne, there is no doubt among the two who is foremost in the hearts and minds of the people of Hommlet and their own followers. This does not appear to trouble Rufus, for he has little talent for lordship and far more ability as a soldier. He busies himself with the good order of the Badgers and also their integration with the militia of Hommlet should the settlement be required to take the field en masse in the future. He is a daily devotee at the Temple of Saint Cuthbert, where he enjoys an easy friendship with Canoness Y’dey and Canon Terjon, the latter of whom he sometimes accompanies on patrols throughout the Kron and the Gnarley verge. Curiously, in his time away Rufus’ hard-won erudition had advanced considerably as well, and soon after his return he embarked upon the authorship of a local history of Verbobonc which still dominates his free hours to this day.

Lord Rufus is known to favour the axe in battle, and has shown to have an uncanny power and accuracy with the weapon. He keeps a dagger as a back-up weapon, and when on the road he also carries a composite bow and a bronzewood club, the better to be armed for any situation. His friendship with Burne has afforded him a wealth of potions as well, and he particularly favours those that boost his physical strength, speed, and endurance as well the granting of energy resistance and displacement effects. 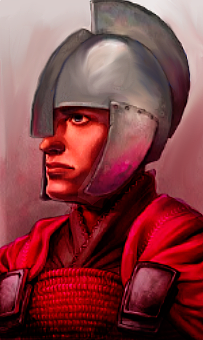