His most honourable sir, Drenton, the third Baronet of Vaswell, is a roguish aristocrat known for his air of affected pomposity. He owns prosperous lands in the north of the Viscounty of Verbobonc.

A handsome, strongly-built if slightly overweight aristocrat of pure Oeridian heritage. His skin is a natural tan hue, deepened even further by countless hours spent in the sun. He keeps his coal coloured hair and beard trimmed short in the fashion of the Gold County, and his clothes also echo Furyondian styles. The nobleman seems to be of endless good cheer; mischief twinkles in his grey eyes and he has a tendency to smirk, as if amused by some private joke. He is armed with a fine sword and a matched dagger. 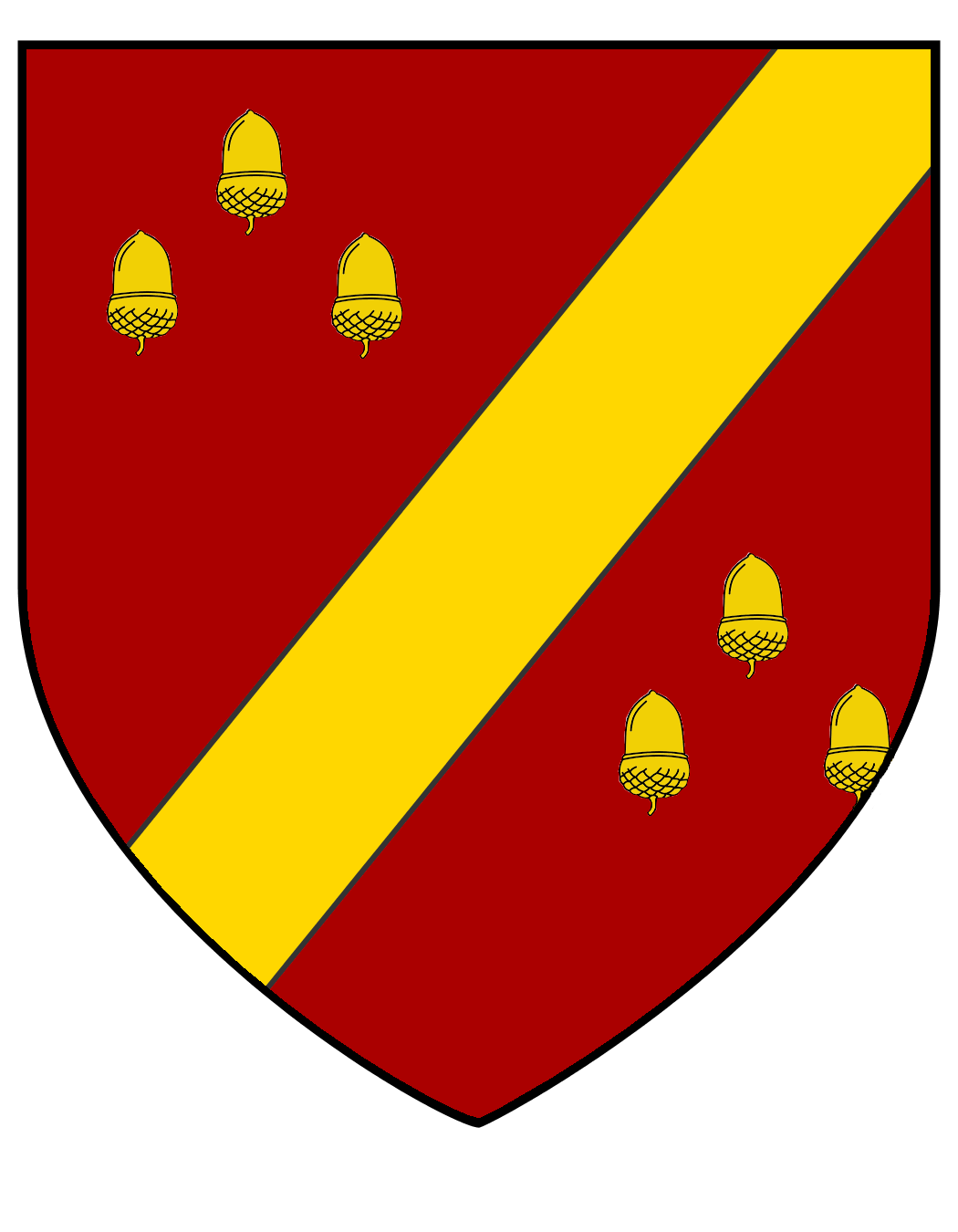 The coat of arms of Sir Drenton, third baronet of Vaswell.

(Expanded from the character as presented in Living Greyhawk Verbobonc: Journal of the Wanderer, p. 15).

A minor lord of the Viscounty of Verbononc, Sir Drenton is the third baronet of Vaswell, a small dominion in the north of that land. His fief abuts the northernmost estates of Viscount Langard himself, starting some thirty miles downriver of the capital and continuing along the the banks of the Velverydyva for about twenty-eight miles further, where the tributary known as the Imeryds Run joins that mighty river. His primary estate is equidistant between the prosperous river port town of Oakham (population 3220) and the thorp of Eglath (population 91). He keeps a richly appointed villa at both settlements, a third house that he is loathe to visit at the village of Taymouth (population 188), and yet another sumptuous abode within the capital itself. Rumour has it that he also owns properties downriver at Stalmaer, across the river in the Kingdom of Furyondy.

As a baronet, he is a landed knight who owns a good deal of land that his successors will also be entitled to own into perpetuity. His feudal role is amorphous, as he ranks below a baron but above other knights, even of the landed variety, and he has granted fiefs to others such from among his significant estates. The correct term of his address is “his most honourable sir, Drenton, the third Baronet of Vaswell,” but in practice, he answers to Sir Drenton and Lord Vaswell as well, depending on the rank of the person addressing him. All are technically correct, depending upon the person addressing him, but the first is most apt. Those who would speak with the baronet ought to be warned, he is moody fellow given to pompous airs when in the presence of common folk or those who do not amuse him.

In times past, most notably during the famed Battle of Emridy Meadows, the Baronet of Vaswell has stood as a loyal vassal at the side of their viscount. Indeed, the fortunes of the House of Vaswell have long been linked to that of the House of Greyfist, who raised them up from household knights generations ago. For his part, Sir Drenton is something of an enigma. It is known that owing to his wild and profligate ways, he and his father Ralton were frequently at odds in his youth, and that once he came of age the young noble took to “touring” (read: adventuring) the northern lands of Furyondy, the Shield Lands, and beyond. He did not return until Sir Ralton’s death from old age in 587 CY, and when he took up his title he made a grand show of swearing his fealty to the dying Wilfrick and then his successors, Fenward and Langard. Over the following years, however, Sir Drenton has faithfully used his own vassals to keep the waterways under his purview clear of trouble, but otherwise he is known to keep to his estates, eschewing involvement in aristocratic politics in order to see to his own amusements.

In terms of power and influence, Lord Vaswell is generally overlooked on account of his comparatively low rank in the local feudal hierarchy. He has no known connections with any of the churches, armies, or organizations of the viscounty, and indeed he tends to rely on his own loyal household guard and itinerant bands of adventurers to handle any trouble that might arise. Even the Mounted Borderers are given the bare minimum of comfort and support throughout the Vaswell lands, and Sir Drenton has been known to publicly, politely urge them on to see to “less stable demesnes” within the viscounty and leave his own faithful retainers to see to his lands and peoples. He does not actively (or at least obviously) involve himself with guild politics in Oakham, but he is known to patronise a good number of carpenters, joiners, cabinetmakers, and shipwrights. Additionally, he owns a small fleet of ships, used to transport goods and people on Verbobonc’s many rivers. It is rumored that he is on friendly terms with the Rhennee bargefolk; certainly, Sir Drenton openly employs Rhennee in some of his businesses.

The majority of people know Lord Vaswell for his parties, which he typically holds at either his lavish estate or his villa at Oakham. They are said to be lowbrow affairs, attracting merchants and the older children of nobles. He’s been known to pick up a lute and satirize the church, other nobles, and even the viscount from time to time. Many others know him as a forgetful, unfocused lout. It’s been said that he has scheduled jousts against other lords, only not to show up. Lord Vaswell never quite pays attention to details, or even the conversations that he’s engaged in. Some just think he’s an overgrown child, mean-spirited, rude, and selfish, but possessed of an undeniable charm. He is a negligent landlord, content to collect his taxes and have his vassal knights and constables see to the law and order of the land. Indeed, his chief ambitions seem to lie in little so much as his own amusements and the steady growth of his fortune, both of which facilitate his enjoyment of life.

He was encountered by Throm, Oscar, Haemir, Candyce, and Ruprect on the 19th of Planting, 591 CY. Apparently his curiosity was aroused by their capture of a gang of bandits and a number of enslaved goblins, the latter of which aroused his suspicion that more of their kind were afoot in his lands. He luncheoned with the adventurers at his villa at the edge of the thorpe of Eglath then, having taken their measure, he commissioned them to lead his retainer, Sir Eldon Ralleywell, to the location where the goblins were originally captured by the bandits. Displaying a curious concern for their well-being given his callow and callous reputation, Sir Drenton cautioned them to retreat at the first sign of overwhelming peril, and Sir Eldon would then lead he and the rest of his bodyguard to the goblin lair. As they left, he bade them the good fortune of the Laughing Rogue in their forthcoming expedition. 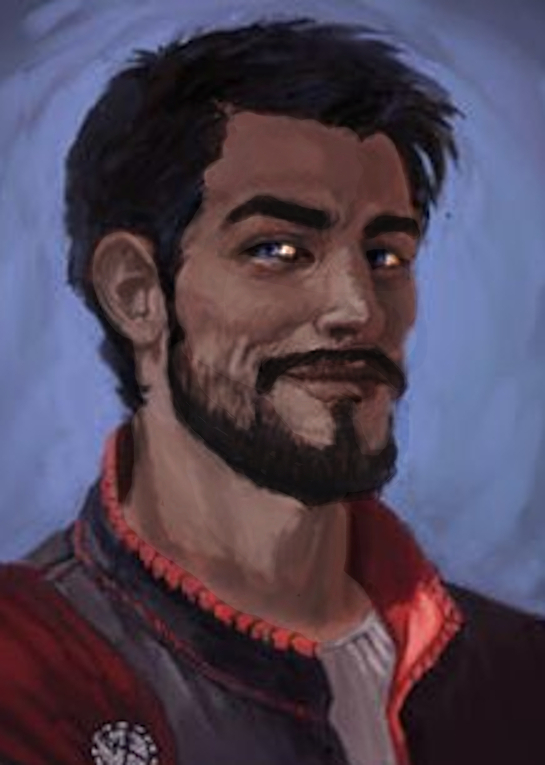