The pretty, no-nonsense daughter of Ostler and Glora Gundigoot. Vesta practically runs the Inn of the Welcome Wench these days, and despite being one of the most eligible maidens in the area, she has little time for hopeful courters.

A good-looking, nimble young woman of the viscounty, dressed the typical blouse, vest, and long skirts of the common folk. She seems a friendly and approachable sort with her warm brown eyes and warm, ready smile, and her auburn hair cascades across her shoulders and down to the small of her back.

When the Silver Spears first arrived at the Welcome Wench, they spoke briefly with the Ostler Gundigoot before the aging innkeeper passed them off to his older daughter, Vesta, who soon saw them housed and fed. They quickly came to appreciate the alacrity with which she managed the many aspects of the busy inn yet also took the time to serve the guests individually as one of the bar maidens. Apparently the innkeeper is not well, so Vesta has taken over most aspects of running the inn.

Rumour has it that at just twenty-two, the oldest daughter of the Gundigoot family is practically something of a spinster despite her pretty looks, good heart, and the fact that she is one of the most eligible maidens of the town. It would seem that she has given short shrift to any number of suitors over the years, but many still try to court her despite her apparent lack of interest in their attentions. She appears to take after her mother’s looks and temperament for the most part, though her generosityof spirit is taken from Ostler instead, as Glora can be very hard-nosed when she feels the need. 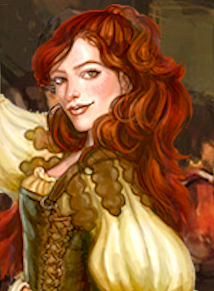