Although he is a paladin of Hieroneous, this warrior seems anything but holy. He is rough in manner, over-fond of ale, and evidently a bit of a womaniser.

A young Oeridian warrior, good-looking, wiry of build, with dark brown hair worn short on top but gathered into a pony tail at back. His grey eyes are the colour of a storm gathering on the horizon. They are often bloodshot, but he has the alert look of a man who has seen a good deal of combat. The warrior is armoured in plate and mail, garbed in a dark blue cloak, and sports a heavy shield bearing the motif of a fist grasping a lightning bolt. A dagger, warhammer, and arming sword are worn at his belt, and on loops affixed to his baldric he also carries a quiver of arrows and bow as well.

The symbol of Hieroneous, the Archpaladin, painted on Xaod’s shield and worn about his neck.

Xaod the Slayer, as he would introduce himself to the Silver Spears, was first encountered at the Inn of the Welcome Wench in Hommlet. In the middle of the busy dinner service he lurched down the stairs leading to the guest quarters, loudly calling for ale as he found a seat in the corner. Marla promptly obliged and the drunken, loutish fellow favoured her with a wink and a playful slap on the rump for her trouble. The bar maiden giggled, obviously game for his attention despite the disapproving frowns of Goodwife Gundigoot and many of the local villagers. Ruprect recognised his Furyondian accent though, and soon wandered over to make his acquaintance and invite the warrior to join their table.

The handsome fellow recognised the highborn manner of Ruprect, and with all due deference he followed the nobleman over to meet the heroes. Over a few more ales, Xaod confirmed that he does indeed hail from Furyondy, having grown to adulthood among the bucolic western plains of the Viscounty of the March, not far from the borders of Fairwain. Once a soldier by trade, he cut his teeth in battle against the hordes of the Old One during the Greyhawk Wars. Indeed, like Ruprect he guarded the walls of Chendl during the Siege of Chendl, enduring a horrifying experience that is still clearly with him.

Unthinkingly, in the telling of his tale of the siege he spoke carelessly of the indifferent defence offered by the little folk (gnomes and halflings) and even flubbed pronunciation of the name of Zonkle Knacklesac, a gnomish hero who is near and dear to the nobleman. Angered, Ruprect leapt to his feet and grabbed the warrior by the throat, demanding an apology. Confused and mortified to have angered his social better, Xaod did indeed immediately proffer such, further explaining that when “on the road” he was “all business,” but when at ease he had a bad tendency to over-indulge in drink. If they would still have him, he would acquit himself as a professional. Mollified, Ruprect accepted the apology and Xaod continued his tale.

Afterwards, he fought battles in the Barony of Kalinstren and County of Crystalreach as the Furyondian armies harried the retreat of the armies of Iuz. As he spoke of such exploits, he grew steadily drunker as he told of facing the unspeakable terror of abyssal armies on the battlefield. Several years later, he would go on to answer his king’s call and fight in the Great Northern Crusade. It was in this latter conflict that he felt called by the Valourous Knight to serve his faithful. He sought out the Church of Hieroneous, and after many trials embarked upon his new career as a holy paladin.

Unfortunately, Xaod has evidently had a difficult time with his vocation. In fact although he is truly devoted to Hieroneous, he has spent most of his career just barely retaining his paladinhood. Indeed he was quite frank that his many, many errors in judgement over the years have left him in poor standing with his church, and he seeks to change this and be worthy of the trust that his god has bestowed upon him. It is just so damnably hard to do, he lamented to them, especially when confronted by a pretty bar wench or good jack of ale…

With that, Xaod seemed to come back to himself and spoke of the Temple of Elemental Evil. Some months ago he had been granted a vision by his god that a great evil was festering in the territory around the foundations of the old temple. Propelled by that vision the paladin came south and, after arriving in Hommlet about a month ago, he sought advice before heading to the temple via the Moathouse. The latter seemed deserted so he moved on after a cursory inspection, while in the former he found only hobgoblins. He slew a number of them but retreated when reinforcements arrived. His vision had involved great fire and magic, not those motley bandits, so Xaod is confused as to what Hieroneous wants him to do next. That is, he was until Ruprect approached him.

With that, Xaod the Slayer wished them a good night. From the following morning he would await their pleasure to explore the Moathouse, and the temple too if that was their intention. His instinct, though, was that the danger to Verbobonc lay elsewhere.

The following day they found him sober, sharpening his sword and dagger, cleaning and polishing his armour, and making his devotions to the Archpaladin. He would remain ready throughout the day, and took only a single jack of ale that night.

Once on the road he was true to his word. He proved an adept rider, moving his horse Lucky up and down the line of the wagons and keeping his eyes on the road and the treeline as they made their way through the hills to the Moathouse. On watch he was alert and serious, sharing small talk with any willing parties save Throm who elicited a more questing conversational approach from the warrior. It would seem that the ease with which the dwarf walks the road of the paladin is stunningly inspirational to Xaod, and he asked many questions of Throm concerning his good habits and generally polished conduct.

Xaod sought to prove himself as soon as they arrived at the ruined keep, for as Candyce was exploring the rickety drawbridge she was attacked by a giant frog. The paladin rushed to her aid but alas, he lost both his footing and his sword as he slipped in the slick mud and fell into the moat. The monster was dispatched quickly enough, and as Throm and Candyce good-naturedly assisted the embarrassed paladin from the morass, Ruprect lunged at his throat once again. As the nobleman exclaimed that Xaod was “on thin ice,” he felt his countryman’s gauntleted hand clamp down on his own wrist, and this time he found no deference or apology in the paladin’s cool grey eyes.

“Any man can lose his footing in battle, milord. The trick is in rising up again.” The last was said with a note of sarcasm. He easily pried the young nobleman’s hand from his throat and rose up to his full height. “Do not do that again.” He then pointedly ignored Ruprect and turned to the others to ask for some assistance in locating his sword.

Just moment’s later, the party was fighting for their lives against the blue dragon Utreshimon. Xaod aquitted himself well, fighting courageously and cleverly. He first dropped sword and shield and hit the flying dragon with a well-placed arrow from his bow. When the dragon was brought to ground by Throm’s clever toss of a tanglefoot bag, Xaod then charged in and smote the beast with his sword. When it back up into the door of the Moathouse keep he was unable to close with it again, at first, so instead he struck it with a hurled dagger. Finally, though wounded sorely by a lightning blast from the dragon’s breath, he then closed once more and stood over the fallen dwarven paladin, smiting Utreshimon again and slitting the dragon’s throat with a stroke from his sword.

It was the death blow, although it could be argued that Utreshimon was already reeling from a stab by Ruprect’s sword and a salvo of Magic Missiles launched from Candyce’s wand. Who can say? Shocked for but a moment, the paladin then thrust his sword into the sky and bellowed the name of his god triumphantly, and Hieroneous appeared to answer, for a rumble of thunder rolled across the swamp and the forest in reply to his call.

Xaod had proven himself. He fell to his knees in prayer while the band looted the dragon’s belongings, then joined the ranks of the Silver Spear as they continued on into the Moathouse. 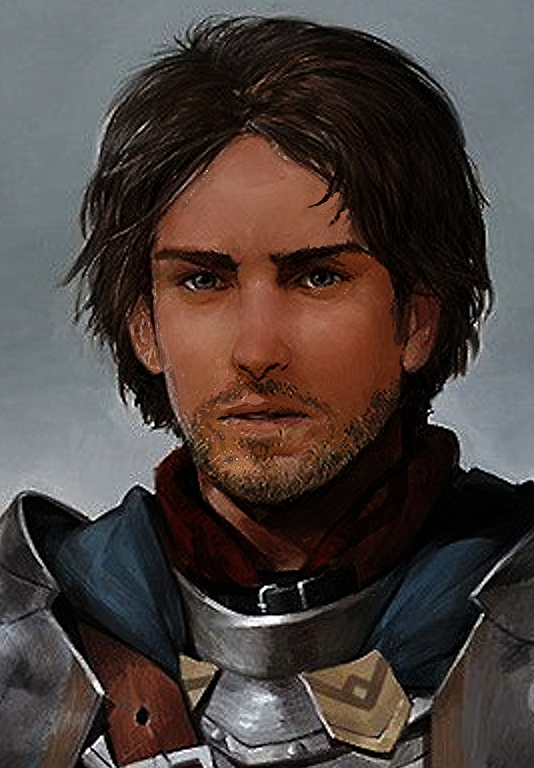