A famed master illusionist and hero of the Greyhawk Wars, this humble, secretive gnome is an advisor to King Belvor IV of Furyondy.

An exceptionally short, middle-aged gnome, his heavy, careworn countenance full of dignity and serious intent. His greying hair is kept conservatively short for his people, but he keeps a lustrous, carefully waxed moustache, mutton-chops, and a pointed chin beard as if to make up for it. He has no shortage of spell component pouches and bears a magical staff of twisted yew, but his robes seem as much those of a well-heeled craftsman as much as those of a wizard. A pair of spectacles perch precariously on his stubby nose.

There are few ways to incense Ruprect Windchester more surely than to insult the integrity of Zonkle Knacklesac, or to disparage the courage, intelligence, and ingenuity of gnomes in general.

Once an obscure paper-maker and local wizard from the village of Namburil, deep in the Gnarley Forest, this brilliant but humble gnome gradually rose to fame as the oldest and wisest member of the Band of Seven Songs, an adventuring troupe founded in the village of Hommlet that went on to much acclaim during the Greyhawk Wars. According to the wistful tales he has been known to tell, Zonkle gained his magical education at the feet of the elder Glenndarc, who now stands as mayor of Sheernob, as well as the elven prince known as Draithanalon Calimnár, both of whom armed him with the belief that magic ought to be used for entertainment, defence, and knowledge, and not for shaping the world according to egotistical desires for material power.

Before his own restless feet and the urgings of his elven mentor drove him into adventure, he was a happy craftsman, father, and grandfather, content to be a good neighbour, even if his fellows found him a bit odd. That seems a lifetime ago to Zonkle these days, and though he yearns for the quietude of his home rent, he knows that he cannot go back. At least, not while the Fiend of the North yet troubles the good folk of the Flanaess. Instead, he is a subtle and dedicated servant of King Belvor IV, working to see the threat of the Old One thrown down once and for all.

During the Greyhawk Wars, the Band of Seven Songs were notably active at the Battle of Critwall Bridge, the Siege of Redoubt, and the Siege of Chendl. It was in this last conflict that their mettle was truly tested against the army of fell humans, orcs, giants, goblins, undead, and demons that surrounded the city. Throughout those horrifying months, when the Chamber of Four famously ravaged the enemy with fireballs, lightning bolts, cones of cold, and acid storms, Master Knacklesac proved that phantasms and illusions were just as important a tactic. He fooled the perceptions of whole companies of the enemy army, luring them into confusion, ambuscade, and panicked retreat. Frightful foes were confusticated by figments, lulled into defenslessness by entrancing patterns, driven insane by their deepest fears made flesh, or even vanquished into solipsistic helplessness so that they could be felled by other heroes.

The chief patrons of the Band of Seven Songs throughout the war were the great mage Ringlerun and the serene priestess Mercion, both of whom were also present as the tide of evil washed up against the walls of Chendl. Late in the siege they stood side by side with the young adventurers when Patch, the High Priest of the Fiend of the North, attacked the eastern wall of the city with a force led by a balor, a marilith, several babau, and an elite cadre of enemy priests, wizards, and warriors. The attack was repulsed and Patch slain, though at the cost of Ringlerun’s own life as he snapped his Staff of Power to unleash a retributive strike to see the fight won.

Later, when the siege was lifted and the smoke cleared, several among the Band of Seven Songs were knighted and awarded lands and other honours for their deeds. Some took their leave of Furyondy to take on other causes or simply enjoy a peaceful life, but no so for Zonkle. Though he was hesistant to accept the honour, the masterful gnome was named His Majesty’s Chief Magical Advisor on All Matters Illusory, Penumbral, and Phantasmal, for it was recognised that while the king could rely on the Chamber of Four and their students as a sort of magical artillery, there was also a need for a subtler hand to deal with unseen threats. Such was the reputation of Zonkle Knacklesac that perhaps only Nystul of the famed Circle of Eight might be considered a finer master of the school of illusion, and such was the gnome’s preference for subtle action that he was deemed a perfect agent for the king’s needs.

Over the following years the gnome continued to rise in the king’s esteem, for he also served during the Great Northern Crusade. During this conflict he became fast friends with Phanstern Windchester, based upon a shared love of illusion magic and the memory of their friend Ringlerun. Afterwards, when he wasn’t up to this or that mysterious errand on behalf of the king, Master Knacklesac was a frequent visitor to Windchestor Manor, especially when Mercion had also taken occasion to visit. And so it was that Ruprect also came to know Zonkle, and while the gnome often gently chided the impetuosity of the young nobleman, he would come to respect the youth’s brilliant intellect and off-beat creativity.

They became friends, and Zonkle would even teach Ruprect a few new spells, perhaps hoping that the figments might steer the youngster away from more destructive magic. The gnome despises violence (though he is steadfast when clear danger and obvious evil is present), and he regards those whose first resort is to brutality as feeble of wit and void of imagination. Those who favour the use of evocation and necromantic magics over subtle illusions, clever transmutations, and pragmatic divinations gain little respect from this most puissant of gnomes. 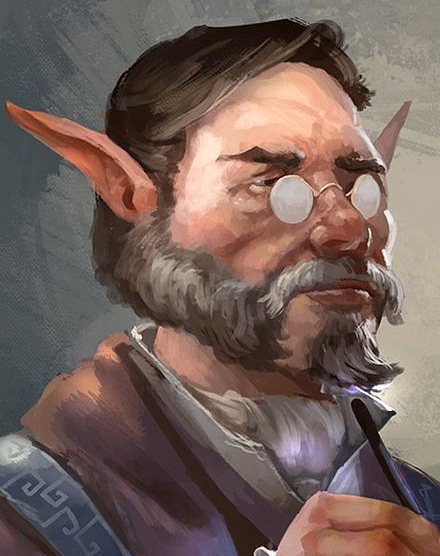