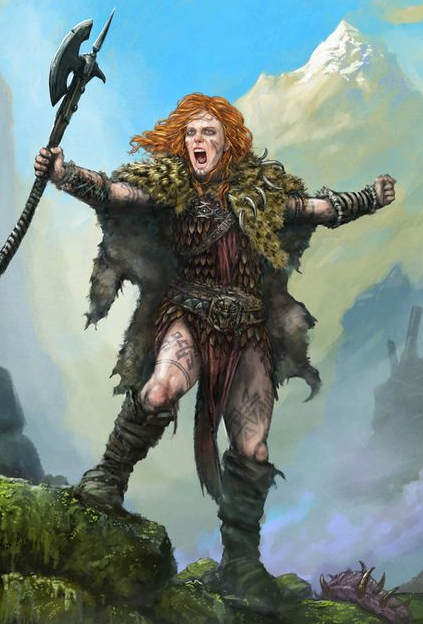 While the heartlands of the Flanaess are peopled by civilised folk with sophisticated laws and social hierarchies, as well as the military traditions that come with them, there have always been rugged and isolated corners of the land where the people cling to older, more savage traditions. Most famously, the Suel folk of the far eastern Thillonrian Peninsula and the formidable Wolf and Tiger tribes of the far western steppes are known for the savagery of their warriors, but closer to home there are no shortage of barbarians in lands such as the rugged hills of the Abbor Alz and the Pomarj, the plains of the Bandit Kingdoms, and the benighted lands of the Old One. Obviously, any lands touched by the barbaric martial culture of the orc or the ogre will host plenty of berserk warriors who lead warbands by example, for never have those peoples held deliberate thought and preparation in much esteem. And finally, some warriors hailing from perfectly civilised societies are so ruled by their anger that they simply cleave to the savagery of their impulses when violence beckons. For these warriors, rage is the only satisfaction in their lives, and they often find themselves taking to the adventure of the road before that anger brings them to ruin at the hands of local authorities.

Note that even among the barbaric tribes of the fringes, the majority of combatants encountered will in fact be of the Warrior professional class or even Fighter heroic class rather than the elite Barbarian heroic class. These warriors have less talent than their more capable analogues, or perhaps they simply lack that special spark of rage that fuels the barbarian in battle. 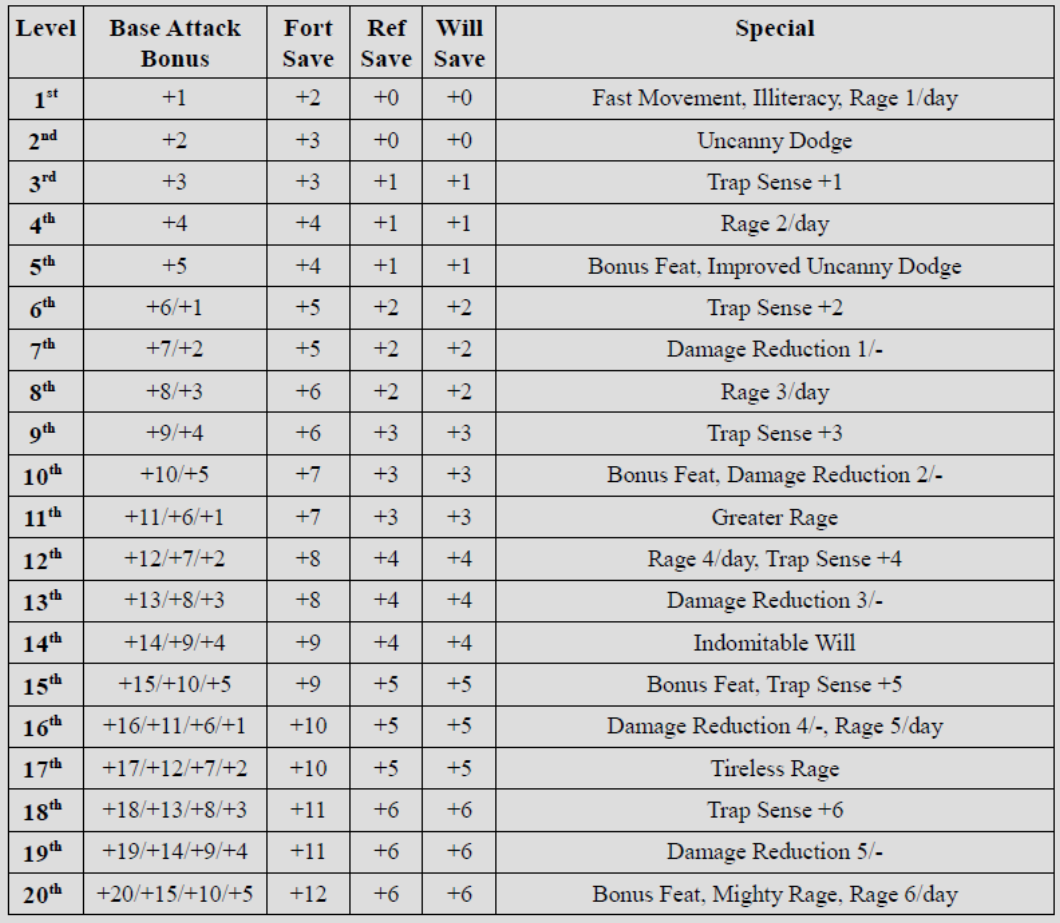 A barbarian is proficient with all simple and martial weapons, light armor, medium armor, and shields (except tower shields).

A barbarian’s land speed is faster than the norm for his race by +10 feet. This benefit applies only when he is wearing no armor, light armor, or medium armor and not carrying a heavy load. Apply this bonus before modifying the barbarian’s speed because of any load carried or armor worn.

Barbarians are the only characters who do not automatically know how to read and write. A barbarian may spend 2 skill points to gain the ability to read and write all languages he is able to speak.

A barbarian who gains a level in any other class automatically gains literacy. Any other character who gains a barbarian level does not lose the literacy he or she already had.

A barbarian can fly into a rage a certain number of times per day. In a rage, a barbarian temporarily gains a +4 bonus to Strength, a +4 bonus to Constitution, and a +2 morale bonus on Will saves, but he takes a – 2 penalty to Armor Class. The increase in Constitution increases the barbarian’s hit points by 2 points per level, but these hit points go away at the end of the rage when his Constitution score drops back to normal. (These extra hit points are not lost first the way temporary hit points are.) While raging, a barbarian cannot use any Charisma-, Dexterity-, or Intelligence-based skills (except for Balance, Escape Artist, Intimidate, and Ride), the Concentration skill, or any abilities that require patience or concentration, nor can he cast spells or activate magic items that require a command word, a spell trigger (such as a wand), or spell completion (such as a scroll) to function. He can use any feat he has except Combat Expertise, item creation feats, and metamagic feats. A fit of rage lasts for a number of rounds equal to 3 + the character’s (newly improved) Constitution modifier. A barbarian may prematurely end his rage. At the end of the rage, the barbarian loses the rage modifiers and restrictions and becomes fatigued (-2 penalty to Strength, -2 penalty to Dexterity, can’t charge or run) for the duration of the current encounter (unless he is a 17th-level barbarian, at which point this limitation no longer applies).

A barbarian can fly into a rage only once per encounter. At 1st level he can use his rage ability once per day. At 4th level and every four levels thereafter, he can use it one additional time per day (to a maximum of six times per day at 20th level). Entering a rage takes no time itself, but a barbarian can do it only during his action, not in response to someone else’s action.

Starting at 3rd level, a barbarian gains a +1 bonus on Reflex saves made to avoid traps and a +1 dodge bonus to AC against attacks made by traps. These bonuses rise by +1 every three barbarian levels thereafter (6th, 9th, 12th, 15th, and 18th level). Trap sense bonuses gained from multiple classes stack.

At 5th level and higher, a barbarian can no longer be flanked. This defense denies a rogue the ability to sneak attack the barbarian by flanking him, unless the attacker has at least four more rogue levels than the target has barbarian levels. If a character already has uncanny dodge from a second class, the character automatically gains improved uncanny dodge instead, and the levels from the classes that grant uncanny dodge stack to determine the minimum level a rogue must be to flank the character.

At 5th level, and every five levels thereafter, the barbarian gains a bonus feat. This feat must be specific to the class, such as Extra Rage, or else an appropriate Regional Feat. The Barbarian Feat list in the Complete Warrior book is also appropriate.

At 7th level, a barbarian gains Damage Reduction. Subtract 1 from the damage the barbarian takes each time he is dealt damage from a weapon or a natural attack. At 10th level, and every three barbarian levels thereafter (13th, 16th, and 19th level), this damage reduction rises by 1 point. Damage reduction can reduce damage to 0 but not below 0.

At 11th level, a barbarian’s bonuses to Strength and Constitution during his rage each increase to +6, and his morale bonus on Will saves increases to +3. The penalty to AC remains at -2.

At 17th level and higher, a barbarian no longer becomes fatigued at the end of his rage.

At 20th level, a barbarian’s bonuses to Strength and Constitution during his rage each increase to +8, and his morale bonus on Will saves increases to +4. The penalty to AC remains at -2.

A barbarian who becomes lawful loses the ability to rage and cannot gain more levels as a barbarian. He retains all the other benefits of the class (damage reduction, fast movement, trap sense, and uncanny dodge).