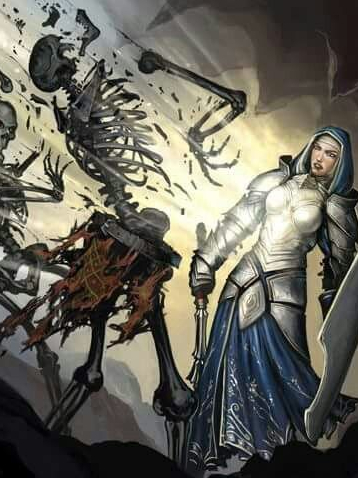 While the cultures of the Flanaess approach divine reverence in an essentially pantheistic manner, in truth religion runs the gamut of accepted communal worship (such as the seasonal gods of the Oeridians and the Old Faith legacy of the Flannae gods) to that of rigid exclusivity demanded by more jealous gods (such as Pholtus and Saint Cuthbert). The cultural and religious clash of this dialectic has caused all manner of strife down the roll of centuries, and in all the civilised lands of the Flanaess, churches raise divine spell-casters who are trained also in the arts of combat so that they might defend their congregations. Their instruction might not be so comprehensive as their more martially inclined Paladin brethren and sistren, but to a very large extent each cleric is more than capable of taking up arms in defence of their congregations.

Of course, the many faiths of the Flanaess interpret their roles in accordance with their dogma and traditions. A cleric of Delleb, Rao, or Olidammara is far less likely to gird themselves for battle than the faithful of Saint Cuthbert, Iuz, Hieroneous, or Hextor, but it is something they have prepared for should they have no other option.

Clerics tend to originate in larger communities, where the resources of the faith serve to train and equip them. However, not all priests in service to the gods have the gift of serving as a conduit for their awesome energies, and those who do are frequently blessed with the power to greatly varying degrees. Clerics gifted with great spellcasting potential and the willingness to use it are pressed into service as active agents of the church. When coupled with enough charisma and intelligence to best use their gifts, they are sure to rise to the loftiest heights of authority in their faith.

Those with little aptitude for spellcasting but blessed with natural athleticism and martial talent find themselves propelled into the role of Paladin (or its analogues), while those with other talents are trained for subordinate roles within the hierarchy or else sent to serve as priests of villages and small towns. The vast majority of priests encountered in these settlements will be low-level clerics or even, with regards to less civilised faiths, Adepts. Sometimes, a powerful and charismatic holy person will arise spontaneously in areas outside the church hierarchy, often through the direct intervention of a deity or one of its exalted servants, and when found these Favoured Souls are quickly sought out for inclusion in the hierarchy, as failure to do so can sometimes lead to the rise of misguided heresy.

Those without the gift at all find their education focussed into roles such as monastic seclusion, church history, canon law, homiletics, or diplomacy. Such men and women can rise quite highly in their assigned roles within the ranks of their church, but they never find their way into role of high priest, prelate, or ecclesiarch. They are encouraged to embrace these lesser roles in service to the gods, and most are indoctrinated with enough humility to do so. Indeed, for every spellcasting cleric found in a major temple of the faith, one might find three or four of these subordinate clergy. Such priests and monks will be Experts rather than clerics, although occasionally a Favoured Soul will spontaneously arise from within their ranks as well.

A cleric’s alignment must be within one step of his deity’s (that is, it may be one step away on either the lawful-chaotic axis or the good-evil axis, but not both). A cleric may not be neutral unless his deity’s alignment is also neutral.

Certain domains, such as Animal, Plant, and Trickery, grant bonus class skills to the clerics who possess them. 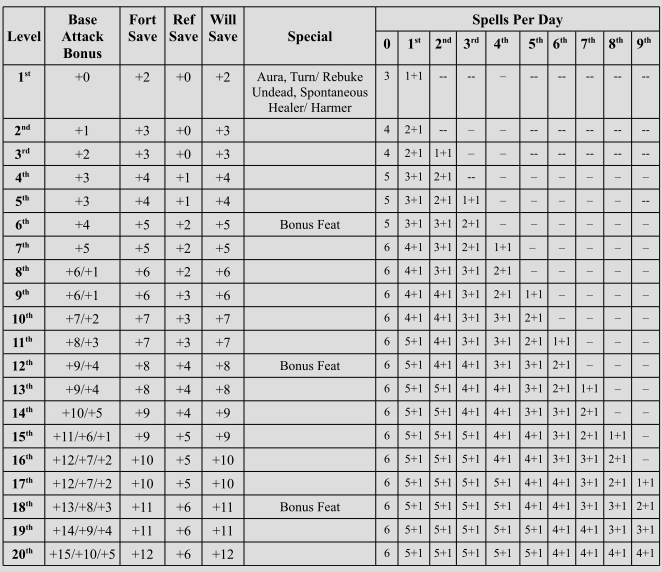 Clerics are proficient with all simple weapons, with all types of armor (light, medium, and heavy), and with shields (except tower shields).

Sometimes, proficiency with the favoured weapon of a deity is not readily available to a cleric, but to a very certain extent, militant clerics of the faith will seek to remedy this. It is not uncommon for them to learn a Martial Weapon Proficiency or Exotic Weapon Proficiency in order to gain the use their deity’s favoured weapons, as doing so is seen as a special mark of devotion to one’s god. Notably, priests of Iuz are known to make a point of learning the use of the greatsword, while those of Hextor practice with the flail, and those of Moradin embrace the brutal finesse of the warhammer.

A cleric of a chaotic, evil, good, or lawful deity has a particularly powerful aura corresponding to the deity’s alignment (see the Detect Evil spell for details).

A cleric casts divine spells, which are drawn from the cleric spell list. However, his alignment may restrict him from casting certain spells opposed to his moral or ethical beliefs; see Chaotic, Evil, Good, and Lawful Spells, below. A cleric must choose and prepare his spells in advance (see below).

Like other spellcasters, a cleric can cast only a certain number of spells of each spell level per day. His base daily spell allotment is given on Table: The Cleric. In addition, he receives bonus spells per day if he has a high Wisdom score. A cleric also gets one domain spell of each spell level he can cast, starting at 1st level. When a cleric prepares a spell in a domain spell slot, it must come from one of his two domains (see Deities, Domains, and Domain Spells, below).

Clerics meditate or pray for their spells. Each cleric must choose a time at which he must spend 1 hour each day in quiet contemplation or supplication to regain his daily allotment of spells. Time spent resting has no effect on whether a cleric can prepare spells. A cleric may prepare and cast any spell on the cleric spell list, provided that he can cast spells of that level, but he must choose which spells to prepare during his daily meditation.

A cleric’s deity influences his alignment, what magic he can perform, his values, and how others see him. A cleric chooses two domains from among those belonging to his deity. A cleric can select an alignment domain (Chaos, Evil, Good, or Law) only if his alignment matches that domain.

Each domain gives the cleric access to a domain spell at each spell level he can cast, from 1st on up, as well as a granted power. The cleric gets the granted powers of both the domains selected.

A good cleric (or a neutral cleric of a good deity) can channel stored spell energy into healing spells that the cleric did not prepare ahead of time. The cleric can “lose” any prepared spell that is not a domain spell in order to cast any cure spell of the same spell level or lower (a cure spell is any spell with “cure” in its name).

An evil cleric (or a neutral cleric of an evil deity), can’t convert prepared spells to cure spells but can convert them to inflict spells (an inflict spell is one with “inflict” in its name).

Clerics can prepare a number of orisons, or 0-level spells, each day, as noted on Table: Cleric under “Spells per Day.” A cleric prays for and memorises orisons in the usual manner. However, those selected will not become exhausted after being cast, so may be cast again later that day. This means that all orisons known may be cast far more often than 3.5 rules allow. A cleric may cast a given orison a number of times each hour equal to their class level, after which it takes their magical conduit to their god’s power a small time to regenerate. In a manner of speaking, the magical energy gone into the orison is not exhausted, but it could be considered fatigued for a little while.

A cleric can’t cast spells of an alignment opposed to his own or his deity’s (if he has one). Spells associated with particular alignments are indicated by the chaos, evil, good, and law descriptors in their spell descriptions.

Any cleric, regardless of alignment, has the power to affect undead creatures by channeling the power of his faith through his holy (or unholy) symbol (see Turn or Rebuke Undead).

A cleric may attempt to turn undead a number of times per day equal to 3 + his Charisma modifier. A cleric with 5 or more ranks in Knowledge (religion) gets a +2 bonus on turning checks against undead.

A cleric’s bonus language options include Celestial, Abyssal, and Infernal (the languages of good, chaotic evil, and lawful evil outsiders, respectively). These choices are in addition to the bonus languages available to the character because of his race.

Clerics gain a bonus feat every six levels starting at 6th level. This must be either a metamagic feat, an item creation feat, or an energy channelling feat. The cleric must meet any prerequisites necessary to take a chosen feat.

A cleric who grossly violates the code of conduct required by his god loses all spells and class features, except for armor and shield proficiencies and proficiency with simple weapons. He cannot thereafter gain levels as a cleric of that god until he atones (see the atonement spell description).