This woodland village fills a natural clearing, comprising some 40 wooden cabins and huts inside a palisaded wall. A decanter of endless water here powers a mill and supplies fresh water to the population.

The community of 174 woodsmen is effectively ruled by Parsimmon Tumercan, a Ranger Knight of the Gnarley whose brother Cedris owns the Gilded Acorn, an inn with good accommodations for up to a dozen folk, and superb food. The place is clearly affluent, strikingly so for a woodsman village. Of course, it‘s much more than that.

Corustaith is the place where rangers, woodsmen of renown, swanmays, and agents of good know how to meet discreetly and among good fellowship. Brownies prowl the fringes, so no one may approach unknown. Likewise, an old mated pair of talking owls spies from the trees around the village. Those who come unbidden receive food and shelter, but are treated coolly unless they are acting in the service of weal.

The village also serves as something of a clearing house for local news. Anything of note that takes place within he Gnarley Forest eventually makes it back to Corustaith eventually, usually sooner rather than later. Occasionally, a Knight of Luna or Knight of the Hart may discretely take a room at the Gilded Acorn, or this Archmage or that Hierophant may arrive in disguise to privately rendezvous with the wise and the good. The ordinary folk of the village are glad for their protectors and fiercely loyal to them, and they have made something of a local game trying to guess the identity of the incognito luminaries that visit their home.

Several elf clans consider the forest near Corustaith to be their heartlands. A good number of the individual Sylvan elves and half-elves of Clan Meldarin are frequent and welcome visitors to the settlement, while a few of the more reserved High and Sylvan elves of Clan Sherendyl come to trade on occasion. Once each year, the latter clan also sends a formal delegation to exchange news and renew bonds of friendship. As a general rule, while individual friendships are common enough the Gnarley Ranger Knights have a policy of being professionally polite and cordial with the leadership of the elves, an attitude which is returned in the spirit with which it is given. However, it would be a stretch to say that mutual relations are anything more than coolly respectful.

At the insistence of his mother Ienre, Haemir Hellbrand prenticed himself to Parsimmon Tumercan in 583 CY, just six months before hostilities erupted between the Pomarj and the folk of the Principality of Ulek, the WIld Coast, and the Welk and Gnarley Forests. The half-elf considers the village of Corustaith to be his second home.

In addition to Parsimmon and Cedris, the settlement is known as the home of Dresha the Herbalist, an old ally of the previous Ranger Knight, Arian Blackbrow. She is a druid who has watched over this part of the forest for more than sixty years, and while she tends to stay out of the conflicts that have recently troubled the woodsmen, she is a firm ally of the Rangers of the Gnarley here. It is known that she can produce many herbal concoctions for healing, digestion, and fertility, and she has served as midwife for dozens of local people across several human generations. For those willing to pay in coin or significant favours she can also brew potions and make magical poultices. 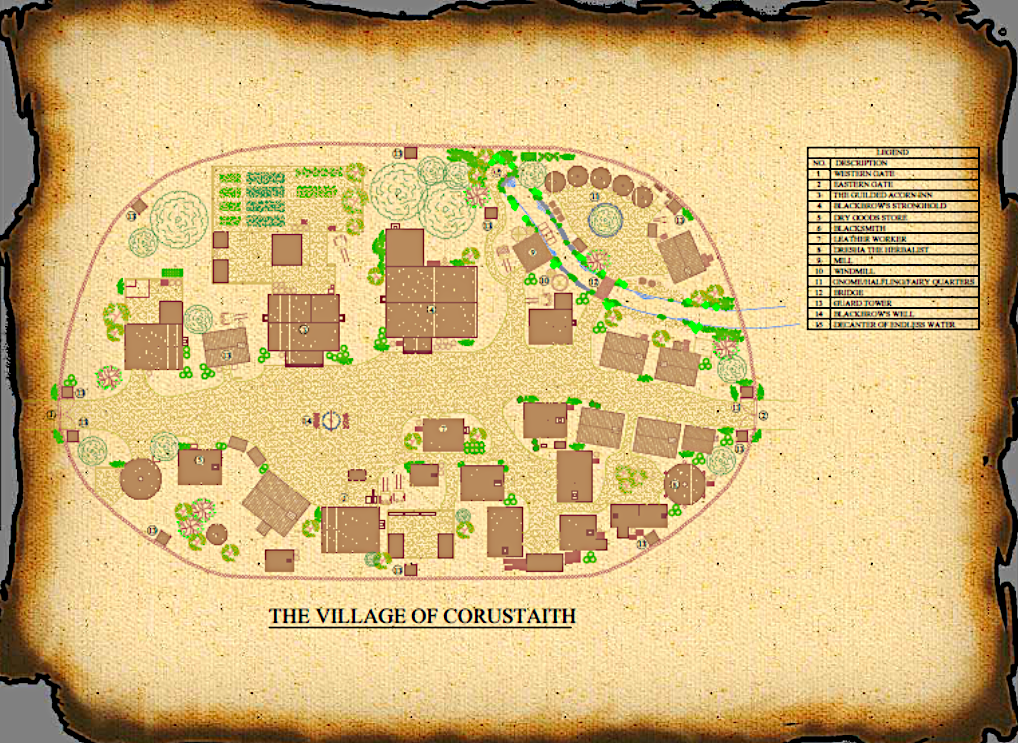