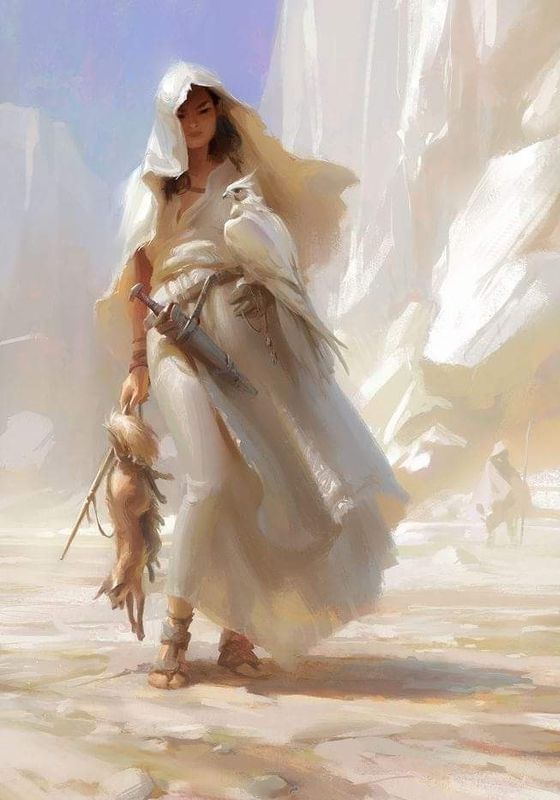 The Flanaess is a polytheistic land, full of competing pantheons predicated not just on cultural mores but also racial heritage. In the Kingdom of Celene, for instance, minority populations of humans, gnomes, and halflings worship Suel deities, the Lords of the Golden Halls, and Yondalla’s Children, but the Seldarine reigns supreme. Excepting the Empire of Iuz, where Old WIcked tolerates few rivals, orcs tend to cleave to their own gods, while goblinoids and giants stick to theirs.

It is accepted custom for most folk of the land to offer propitiation to any number of gods while favouring a single one above all, but in some lands a single faith has grown particularly strong at the expense of their rivals. In the Theocracy of the Pale, few would dare to invoke a god other than Pholtus, while even amidst the far more tolerant Archclericy of Veluna the name of Rao is on nearly ever mortal’s lips, and other religions are relegated to distant pretenders. Some gods such as Boccob, Ehlonna, Saint Cuthbert and (regrettably) the aforementioned Iuz have transcended cultural and racial ties, gaining a special status by virtue of their exclusivity or inclusivity.

In every land, faiths feel the pressure to strengthen their position. They organise their churches along strict hierarchies, raising great temples to inspire their congregations and forbidding abbeys to hoard their knowledge. Enormous sums are spent to train and equip militant priests to lead and defend their faith, or even to crush its enemies. These worthy souls are identified early in their devotional training, for the ability to channel the divine power of their gods and the good judgement to see when to do so is invaluable to their faiths. Invariably, such people are trained to be Clerics or, if of more athletic and less contemplative temperaments, Paladins. Those without the talent for magic take holy orders as monks or lay priests, and can serve in a variety of ways as Experts.

It is rare for people of talent to be overlooked but occasionally, a mortal will be so devoted to a god that their passion establishes the conduit to the divine where rigid discipline and wisdom would otherwise serve. If found within locales where the faith is strong, efforts are soon made to coopt these rare, charismatic folk so that they might be indoctrinated and put to good use as preachers and proselytisers. Sometimes, they will even arise among members of the clergy that formerly served in a lesser role, and these folk will usually go on to lead their abbey, or find promotion and further training in their home temples.

However, it is far more likely that these singularly favoured souls will spontaneously arise in rural areas, or in lands where the faith to the god in question is typically weak. There their talents make them either local prophets, dangerous subversives to enemy faiths, or even reviled heretics to the organised hierarchy of their own faith. In such cases, they will arise from any walk of life, but there seems to be a disproportionate number who arise from the crude traditions of Adepts, particularly in less civilised lands or barbaric peoples.

No matter their origins, favoured souls enjoy a special understanding with their god that even a cleric might envy. Their dreams are often blessed (or cursed) by visions of the celestial or fell realms, and the manner in which their bodies and souls are shaped by the divine energies they wield has nothing less than a transformative effect. As understanding and power grows, these intuitively spiritual folk come to take on traits that are typically common to the divine servitors of their god, gaining supernatural resistance to damage and even, in time, growing angelic or demonic wings. Some favoured souls (usually of the heretical variety) have hinted that all of their ilk have distant celestial or infernal ancestors, and their transformation is nothing so much as their immortal blood calling them home… 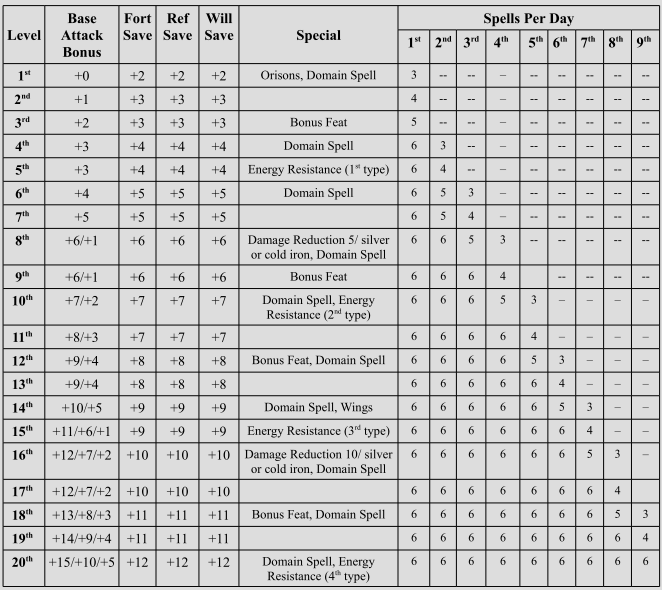 Spells: A favored soul casts divine spells (the same type of spells available to clerics), which are drawn from the cleric spell list. She can cast any spell she knows without preparing it ahead of time the way a cleric must.

To cast a spell, a favored soul must have a Charisma score of 10 + the spell’s level (Cha 10 for 0-level spells, Cha 11 for 1st-level spells, and so forth). The Difficulty Class for a saving throw against a favored soul’s spell is 10 + the spell’s level + the favored soul’s Charisma modifier. Like other spellcasters, a favored soul can cast only a certain number of spells of each spell level per day. Her base daily spell allotment is given on Table: The Favored Soul. In addition, she receives bonus spells for a high Charisma.

Unlike a cleric, a favored soul need not prepare her spells in advance. She can cast any spell she knows at any time, assuming she has not yet used up her spells per day for that spell level.

The domain spells granted to the Favoured Soul each day are additional to the spells per day allocated on the table.

Favoured Souls may cast a number of orisons, or 0-level spells, each day, as noted under the Table: “Sorcerer Spells Known.” A sorcerer casts cantrips in the usual manner. However, those selected will not become exhausted after being cast, so may be cast again later that day. This means that all orisons known may be cast far more often than 3.5 rules allow. A Favoured Soul may cast a given orison a number of times each hour equal to their class level, after which it takes their conduit to the wellspring of their god’s power a small time to regenerate. In a manner of speaking, the magical energy gone into the orison is not exhausted, but it could be considered fatigued for a little while. 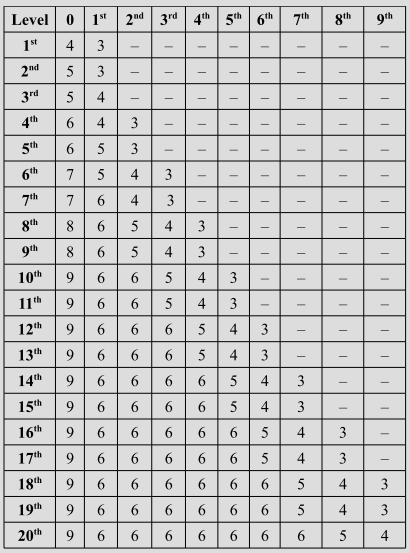 As their connection to their divine patron grows stronger, the body of the Favoured Soul becomes infused with otherworldly energy. Slowly, they grow resistant to harmful energies. At 5th level, a favored soul chooses an energy type and gains resistance 10 against that type. At 10th level,15th level, and 20th level, the character gains resistance 10 against another energy type of her choosing. The player should be encouraged to work with their DM to adopt an energy resistance most in common with the nature of their god.