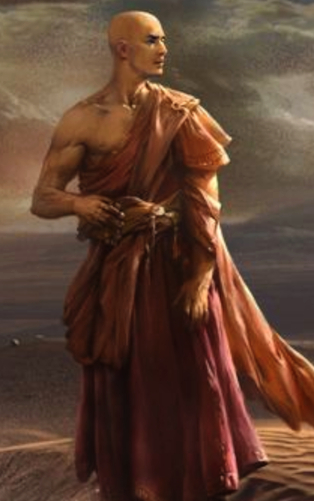 Monasteries are a common enough sight throughout the civilised lands of the Flanaess. Within their hallowed walls, monks keep libraries detailing the theology, philosophy, natural history, planar lore, and history of their church, engage in the laborious task of copying those works for the edification of their brothers and sisters in the faith, sing hymns to the glory of their god, and engage in the wider administration of the holdings of the faith in service to their various ecclesiarchs. Indeed, not a few abbots manage significant lands, producing food, fine ales, and wines not just for their own sustenance but also to swell the coffers of their church, and they pay taxes to secular rulers for the privilege of doing so.

Frequently, monasteries also serve to educate the common folk, tend their hurts, offer alms, and provide shelter to travellers and pilgrims when inns are not available. And lastly, the monastery or convent is a refuge for those who do not easily fit into society: orphans and outcasts, bastards, those scarred or deformed by accident of birth, misfortune, or war, and the mad. For the most part, the discipline and unambiguous morality of the monastic life appeals most commonly to followers of lawful or contemplative deities such as Rao, Pelor, Allitur, Saint Cuthbert, Hieroneous, Pholtus, Lendor, Cyndor, Stern Alia, Hextor, Wee Jas, Zilchus, Boccob, Celestian, and Zodal.

For the most part, it is humans, half-elves, and half-orcs who are drawn to this style of life, for it is these peoples who are more affected by the vagaries of existence. Elves, dwarves, halflings, and gnomes tend to cleave to other cultural mores that foster spirituality, stability, and acceptance within the bounds of their isolated communities, but occasionally those who are raised among humans are also drawn to the monastic life. Nearly everywhere throughout the central heartlands of the Flanaess, the Sheldomar Valley, and the Aerdi East, the vast majority of these monks will be Experts who are ill-disposed towards lives of adventure. More rarely, Favoured Souls, Clerics, or even Paladins either take their retirement in a monastery or find themselves leading a monastic existence for a length of time before returning to more active lives. Certainly, it is more likely to find those heroic classes leading abbeys and convents.

However, these are not the only monasteries to be found in the Flanaess.

Throughout the Baklunish West and those nations that immediately border them such as Veluna and Bissel, centuries of cultural exchange has fostered the gradual adoption or adaption of ancient traditions of fighting monks that have been preserved since the Twin Cataclysms. Zuoken, the god of physical and mental mastery, is typically the patron of such monasteries, though other Baklunish deities are also represented to a lesser degree. However, there are also smaller orders dedicated to Rao, Pelor, Hieroneous, Pholtus, Mayaheine, and Saint Cuthbert in the West, and while such monasteries and convents are still rare, a few faiths have even established priories as far afield as Furyondy, Veluna, Dyvers, and the Gran March. Other gods may have monastic followings of this sort, but their numbers would be tiny indeed.

Of course, the elephant in the room will always be the monastic traditions of the Suel. Prior to the Greyhawk Wars, the Scarlet Brotherhood was thought to be a rather harmless cabal of scholastic monks interested only in fostering their unique derivation of Suel culture throughout those lands that heretofore possessed strong populations of those of their own people who did not share their centuries of history among the misty, secluded plateaus of the Tilvanot Peninsula. They offered their well-travelled and wisely considered advice aptly and freely, and thus found places for themselves in many courts throughout the Iron League, the Holds of the Sea Princes, the Lordship of the Isles, the Kingdom of Keoland, the Duchy of Urnst, several of the Ulek States, and even the southern ports of the Kingdom of Nyrond.

Later, during the conflict that was later dubbed the Greyhawk Wars, when the attention of many of those states was directed to the conflict-torn states north of the Nyr Dyv and the Aerdi East, the Scarlet Brotherhood suddenly struck. Nations fell as dozens of lords were assassinated or cowed within a matter of weeks, and the martial efficacy of the fighting monks of the Scarlet Sign soon became a thing to be feared, just as their legions of soldiers and assassins humbled a number of states. While many of those gains have been eroded over the years since, never again will the Scarlet Brotherhood be underestimated anywhere in the Flanaess. These days, on the rare occasions when they show themselves openly, they are figures of fear and suspicion, and frequently rumours assign them superhuman levels of strength, dexterity, stamina, and fighting skill just as gossip concerning their villainy follow them everywhere. These sentiments are also frequently extended to all Suel people, even though the population of the lands under their purview is quite tiny compared to the numbers of those who reside in Urnst, Keoland, the Uleks, and even Celene. 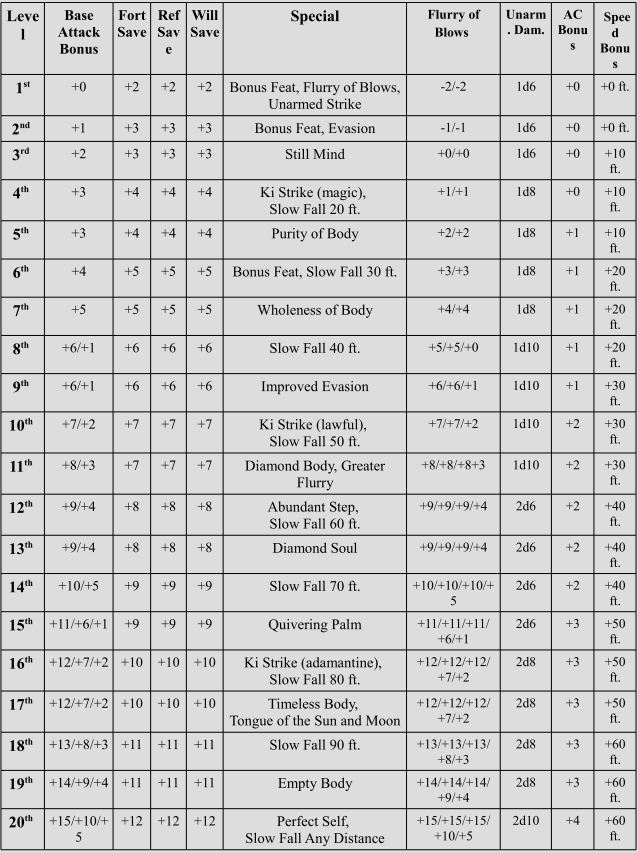 Monks are not proficient with any armor or shields

When wearing armor, using a shield, or carrying a medium or heavy load, a monk loses her AC bonus, as well as her fast movement and flurry of blows abilities.

When unarmored and unencumbered, the monk adds her Wisdom bonus (if any) to her AC. In addition, a monk gains a 1 bonus to AC at 5th level. This bonus increases by 1 for every five monk levels thereafter (2 at 10th, +3 at 15th, and +4 at 20th level).

When unarmored, a monk may strike with a flurry of blows at the expense of accuracy. When doing so, she may make one extra attack in a round at her highest base attack bonus, but this attack takes a -2 penalty, as does each other attack made that round. The resulting modified base attack bonuses are shown in the Flurry of Blows Attack Bonus column on Table: The Monk. This penalty applies for 1 round, so it also affects attacks of opportunity the monk might make before her next action. When a monk reaches 5th level, the penalty lessens to -1, and at 9th level it disappears. A monk must use a full attack action to strike with a flurry of blows.

At 1st level, a monk gains Improved Unarmed Strike as a bonus feat. A monk’s attacks may be with either fist interchangeably or even from elbows, knees, and feet. This means that a monk may even make unarmed strikes with her hands full. There is no such thing as an off-hand attack for a monk striking unarmed. A monk may thus apply her full Strength bonus on damage rolls for all her unarmed strikes.

At 2nd level or higher if a monk makes a successful Reflex saving throw against an attack that normally deals half damage on a successful save, she instead takes no damage. Evasion can be used only if a monk is wearing light armor or no armor. A helpless monk does not gain the benefit of evasion.

At 3rd level, a monk gains an enhancement bonus to her speed, as shown on Table: The Monk. A monk in armor or carrying a medium or heavy load loses this extra speed.

A monk of 3rd level or higher gains a +2 bonus on saving throws against spells and effects from the school of enchantment.

At 4th level or higher, a monk within arm’s reach of a wall can use it to slow her descent. When first using this ability, she takes damage as if the fall were 20 feet shorter than it actually is. The monk’s ability to slow her fall (that is, to reduce the effective distance of the fall when next to a wall) improves with her monk level until at 20th level she can use a nearby wall to slow her descent and fall any distance without harm.

At 5th level, a monk gains immunity to all diseases except for supernatural and magical diseases.

At 7th level or higher, a monk can heal her own wounds. She can heal a number of hit points of damage equal to twice her current monk level each day, and she can spread this healing out among several uses.
Improved Evasion (Ex)

At 9th level, a monk’s evasion ability improves. She still takes no damage on a successful Reflex saving throw against attacks, but henceforth she takes only half damage on a failed save. A helpless monk does not gain the benefit of improved evasion.

At 11th level, a monk gains immunity to poisons of all kinds.

At 12th level or higher, a monk can slip magically between spaces, as if using the spell dimension door, once per day. Her caster level for this effect is one-half her monk level (rounded down).

Starting at 15th level, a monk can set up vibrations within the body of another creature that can thereafter be fatal if the monk so desires. She can use this quivering palm attack once a week, and she must announce her intent before making her attack roll. Constructs, oozes, plants, undead, incorporeal creatures, and creatures immune to critical hits cannot be affected. Otherwise, if the monk strikes successfully and the target takes damage from the blow, the quivering palm attack succeeds. Thereafter the monk can try to slay the victim at any later time, as long as the attempt is made within a number of days equal to her monk level. To make such an attempt, the monk merely wills the target to die (a free action), and unless the target makes a Fortitude saving throw (DC 10 + ½ the monk’s level + the monk’s Wis modifier), it dies. If the saving throw is successful, the target is no longer in danger from that particular quivering palm attack, but it may still be affected by another one at a later time.

Upon attaining 17th level, a monk no longer takes penalties to her ability scores for aging and cannot be magically aged. Any such penalties that she has already taken, however, remain in place. Bonuses still accrue, and the monk still dies of old age when her time is up.

Tongue of the Sun and Moon (Ex)

A monk of 17th level or higher can speak with any living creature.

At 20th level, a monk becomes a magical creature. She is forevermore treated as an outsider rather than as a humanoid (or whatever the monk’s creature type was) for the purpose of spells and magical effects. Additionally, the monk gains damage reduction 10/magic, which allows her to ignore the first 10 points of damage from any attack made by a nonmagical weapon or by any natural attack made by a creature that doesn’t have similar damage reduction. Unlike other outsiders, the monk can still be brought back from the dead as if she were a member of her previous creature type.

A monk who becomes nonlawful cannot gain new levels as a monk but retains all monk abilities.

Like a member of any other class, a monk may be a multiclass character, but multiclass monks face a special restriction. A monk who gains a new class or (if already multiclass) raises another class by a level may never again raise her monk level, though she retains all her monk abilities.