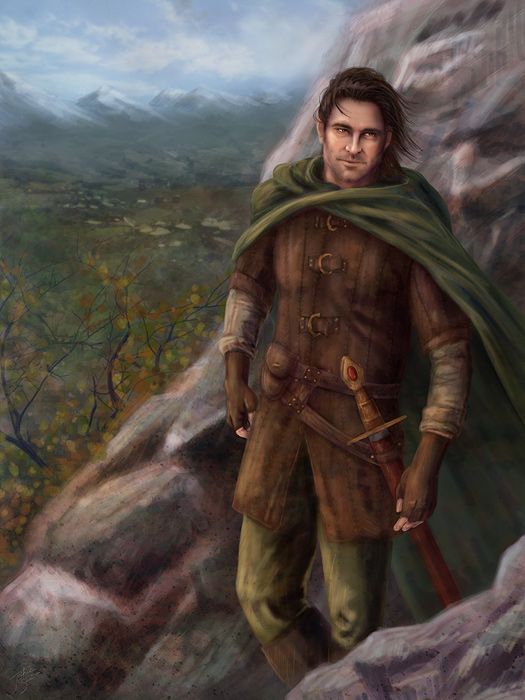 Many corners of the Flanaess only technically find themselves within the borders of established realms, while others do not find themselves under any official law at all. Amidst the trackless depths of the Phostwood, Oytwood, and the Gnarley, Vesve, and Celadon forests, the rugged fastness of the Lortmils, Griffs, Clatspurs, and the Rakers, or the broken hills of the Abbor Alz, the Kron, the Cairn, and the Lofts, the word and will of the ranger is as good as gold. They patrol the land, working to make it safe for the isolated farms, homesteads, and hamlets, and in return they have the respect of the people.

In some areas such as the Gnarley Forest and the Highfolk, fellowships of rangers have organised into hierarchies gathered behind self-appointed ranger knights and ranger lords. In times of trouble, these rough, self-reliant men and women can field companies of formidable scouts and warriors. Even dwarf holds have no shortage of doughty warriors skilled in tracking, hunting, and ambuscade to ensure the security of their underhalls and their lofty gates.

However, not all rangers are men and women of high moral fibre. In some lonely and rugged lands, rangers earn a good living as bounty hunters tasked with hunting down outlaws. Quite frequently, their quarry also possess the same skills, and it is not unusual to find brigand chiefs and bandit lords with plenty of ranging ability. Lastly, in the wild corners of the Flanaess where the likes of orcs, goblins, kobolds, and ogres dominate the land, it is not at all unusual to find savage examples of the ranger who are quite adept at hunting men, elves, and dwarves.

Many of the folk roughing it in the wilds as woodsmen, trappers, herders, hunters, and bandits will in fact be be of the Warrior, Commoner, or (rather more rarely) Expert professional classes rather than the elite Ranger heroic class. It takes special talent, intuition, and training to be ranger. 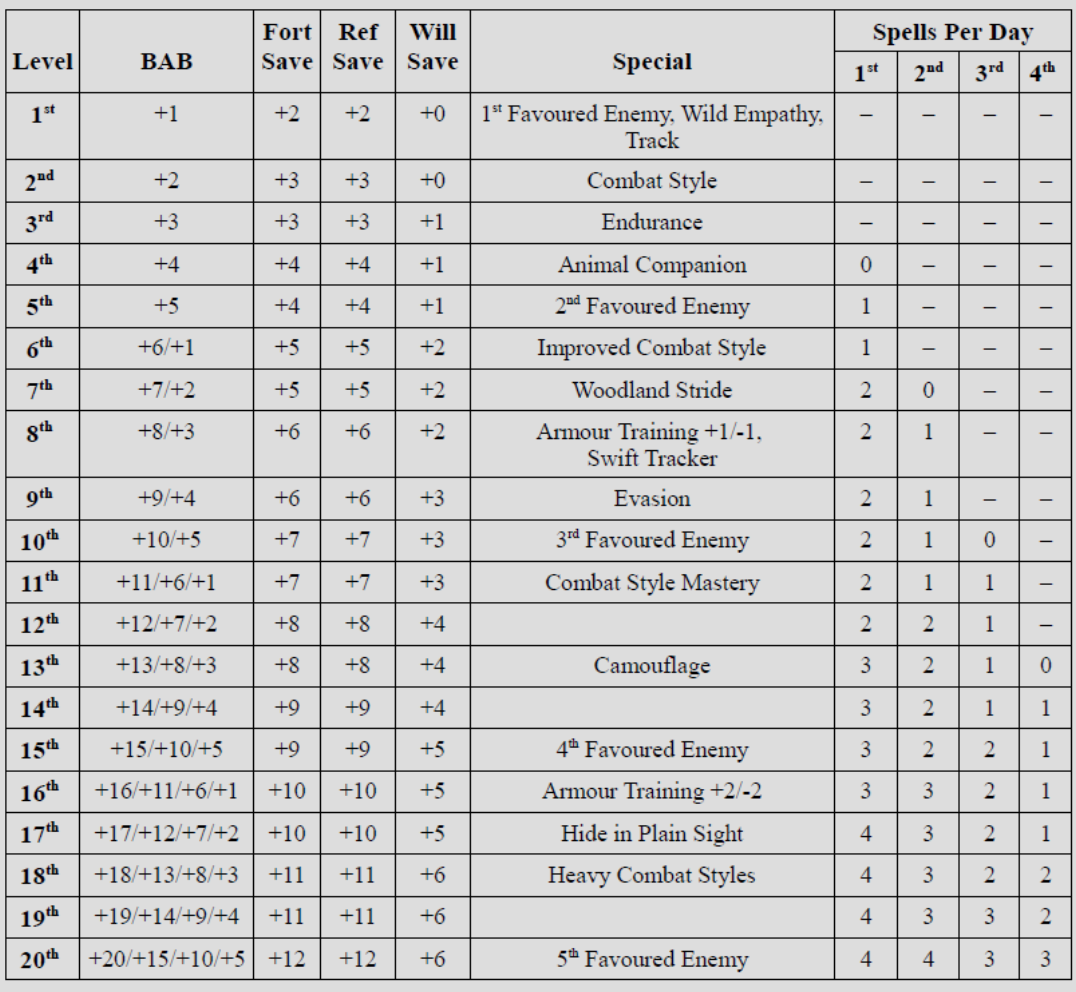 A ranger is proficient with all simple and martial weapons, and with light armor, medium armour, and shields (except tower shields).

At 1st level, a ranger selects a creature type from the ranger favored enemies table. He gains a +2 bonus on Bluff, Knowledge, Listen, Sense Motive, Spot, and Survival checks against creatures of his selected type. Likewise, he gets a +2 bonus on weapon attack and damage rolls against them. A ranger may make Knowledge skill checks untrained when attempting to identify these creatures.

At 5th level and every five levels thereafter (10th, 15th, and 20th level), the ranger may select an additional favored enemy. In addition, at each such interval, the bonus against any one favored enemy (including the one just selected, if so desired) increases by +2. 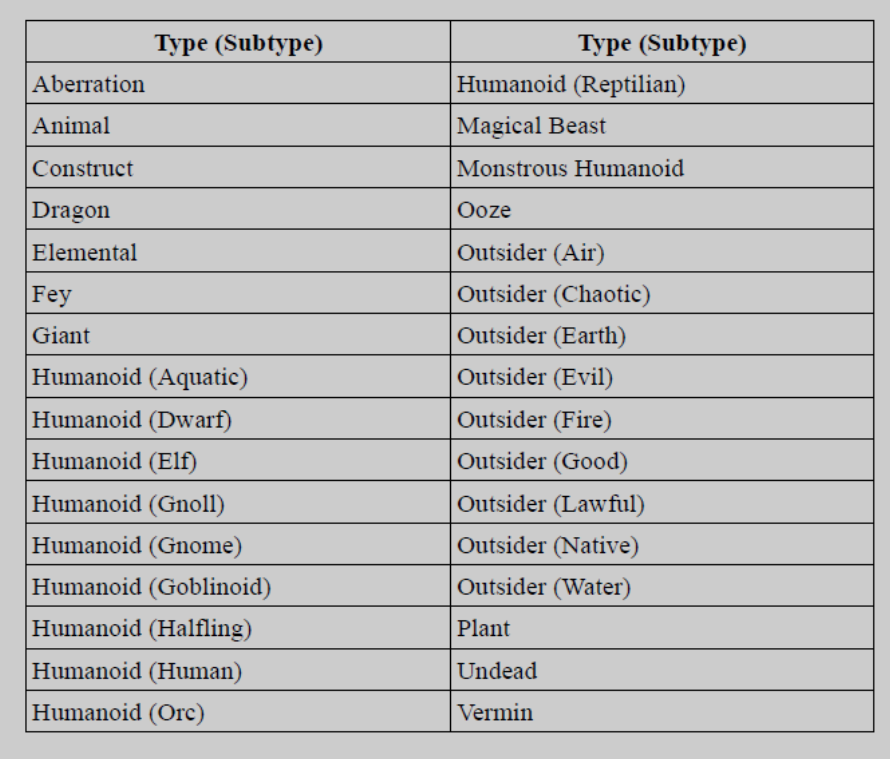 If the ranger chooses humanoids or outsiders as a favored enemy, he must also choose an associated subtype, as indicated on the table to the right. (Note that there are other types of humanoid to choose from—those called out specifically on the table below are merely the most common.) If a specific creature falls into more than one category of favored enemy, the ranger’s bonuses do not stack; he simply uses whichever bonus is higher.

A ranger gains Track as a bonus feat.

To use wild empathy, the ranger and the animal must be able to study each other, which means that they must be within 30 feet of one another under normal visibility conditions. Generally, influencing an animal in this way takes 1 minute, but, as with influencing people, it might take more or less time.

The ranger can also use this ability to influence a magical beast with an Intelligence score of 1 or 2, but he takes a -4 penalty on the check.

At 2nd level, a ranger must select one of two combat styles to pursue: archery or two-weapon combat. This choice affects the character’s class features but does not restrict his selection of feats or special abilities in any way.

If the ranger selects archery, he is treated as having the Rapid Shot feat, even if he does not have the normal prerequisites for that feat.

If the ranger selects two-weapon combat, he is treated as having the Two-Weapon Fighting feat, even if he does not have the normal prerequisites for that feat.

The benefits of the ranger’s chosen style apply only when he wears light, medium, or no armor. He loses all benefits of his combat style when wearing heavy armor.

A ranger gains Endurance as a bonus feat at 3rd level.

At 4th level, a ranger gains an animal companion selected from the following list: badger, camel, dire rat, dog, riding dog, eagle, hawk, horse (light or heavy), owl, pony, snake (Small or Medium viper), or wolf. If the campaign takes place wholly or partly in an aquatic environment, the following creatures may be added to the ranger’s list of options: manta ray, porpoise, Medium shark, and squid. This animal is a loyal companion that accompanies the ranger on his adventures as appropriate for its kind. A ranger’s animal companion shares his favored enemy and bonuses.

Beginning at 4th level, a ranger gains the ability to cast a small number of divine spells, which are drawn from the ranger spell list. A ranger must choose and prepare his spells in advance (see below).

Like other spellcasters, a ranger can cast only a certain number of spells of each spell level per day. His base daily spell allotment is given on Table: The Ranger. In addition, he receives bonus spells per day if he has a high Wisdom score. When Table: The Ranger indicates that the ranger gets 0 spells per day of a given spell level, he gains only the bonus spells he would be entitled to based on his Wisdom score for that spell level. The ranger does not have access to any domain spells or granted powers, as a cleric does.

A ranger prepares and casts spells the way a cleric does, though he cannot lose a prepared spell to cast a cure spell in its place. A ranger may prepare and cast any spell on the ranger spell list, provided that he can cast spells of that level, but he must choose which spells to prepare during his daily meditation.

Through 3rd level, a ranger has no caster level. At 4th level and higher, his caster level is one-half his ranger level.

At 6th level, a ranger’s aptitude in his chosen combat style (archery or two-weapon combat) improves. If he selected archery at 2nd level, he is treated as having the Manyshot feat, even if he does not have the normal prerequisites for that feat.

If the ranger selected two-weapon combat at 2nd level, he is treated as having the Improved Two-Weapon Fighting feat, even if he does not have the normal prerequisites for that feat.

As before, the benefits of the ranger’s chosen style apply only when he wears light, medium, or no armor. He loses all benefits of his combat style when wearing heavy armor.

Starting at 7th level, a ranger may move through any sort of undergrowth (such as natural thorns, briars, overgrown areas, and similar terrain) at his normal speed and without taking damage or suffering any other impairment.

However, thorns, briars, and overgrown areas that are enchanted or magically manipulated to impede motion still affect him.

Starting at 8th level, a ranger learns to be more maneuverable while wearing armor. Whenever wearing armor, they reduce the armor check penalty by 1 (to a minimum of 0) and increases the maximum Dexterity bonus allowed by their armor by 1. At 16th level, these bonuses increase by +1, granting a maximum –2 reduction of the armor check penalty and a +2 increase of the maximum Dexterity bonus allowed.

In addition, from 8th level a ranger can also move at normal speed while wearing medium armor.

At 9th level, a ranger can avoid even magical and unusual attacks with great agility. If he makes a successful Reflex saving throw against an attack that normally deals half damage on a successful save, he instead takes no damage. Evasion can be used only if the ranger is wearing light armor or no armor. A helpless ranger does not gain the benefit of evasion.

At 11th level, a ranger’s aptitude in his chosen combat style (archery or two-weapon combat) improves again. If he selected archery at 2nd level, he is treated as having the Improved Precise Shot feat, even if he does not have the normal prerequisites for that feat.

If the ranger selected two-weapon combat at 2nd level, he is treated as having the Greater Two-Weapon Fighting feat, even if he does not have the normal prerequisites for that feat.

As before, the benefits of the ranger’s chosen style apply only when he wears light, medium, or no armor. He loses all benefits of his combat style when wearing heavy armor.

A ranger of 13th level or higher can use the Hide skill in any sort of natural terrain, even if the terrain doesn’t grant cover or concealment.

While in any sort of natural terrain, a ranger of 17th level or higher can use the Hide skill even while being observed.

At 18th level, the ranger gains proficiency with heavy armour and, additionally, he may now use his Combat Style feats when using heavy armour.