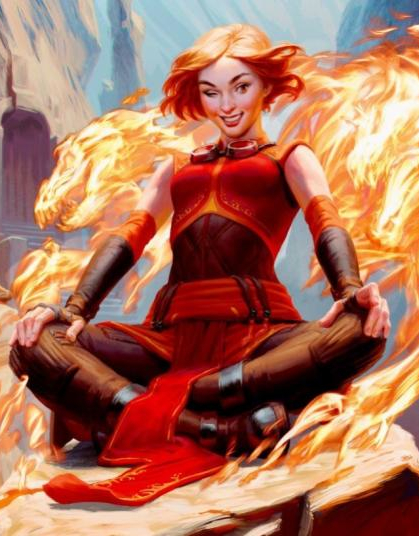 If the wizard harnesses their innate arcane spark by virtue of rigid discipline, intensive study, and careful experimentation, the sorcerer instead feels the power thrumming in their ears, singing in their veins, and whispering in their dreams. Through listening to that power, they embrace magic in an utterly raw and intuitive manner, coming into their strength somewhat more slowly and with a narrower focus than the wizard, but possessed of the ability to summon up immense reserves of strength as well as the capacity to do so without requiring the study of complex arcane formulae each morning.

While the typical wizard is feared and respected but ultimately accepted by the common folk as a necessary evil, most sorcerers instead inspire suspicion, prejudice, and sometimes outright terror. Indeed, in many cases a sorcerer is forced to abandon home and hearth just in order to survive the hostility of their neighbours, as whispers of dark pacts, chaotic power, and strange happenings tend to follow them as their talents increasingly manifest through their formative years. As such, sorcerers tend to be wanderers, living by their wits and often pretending to be something else. Frequently, they will actually masquerade as wizards, banking on the likelihood that the layman will lack the understanding to know the difference. Quite often they fall into the company of other fringe-dwellers such as bards, rogues, and rangers, and they make natural adventurers. However, older sorcerers tend to be hermits, keeping to remote caves or towers so that they can truly meditate on the mysteries of their legacy of power.

Sorcerers are rare in the Flanaess, or at least they are few and far between in the civilised heartlands. Budding sorcerers stand out, as arcane chaos follows them and their powers sometimes erupt as spontaneous bursts of fire, ice, electricity, and acid, or else their words involuntarily levy curses upon those who earn their displeasure. Those with the most powerful intrinsic potential for magic tend to manifest the gift with the onset of puberty, frightening their families, their neighbours, and even themselves. Wizards are always keeping an eye out for magical threats or potential apprentices to do their drudge work, and they tend to be quick to accept offers from families that seek to divest themselves of a troublesome youth. Under their strict, demanding teachers, nascent young sorcerers usually internalise and intellectualise their gifts, channelling their power into the study of wizardry instead.

Curiously, when anomalous arcanists are encountered among goblinoids, orcs, giants, and especially kobolds, they are more likely to be sorcerers rather than Wizards, for these peoples rarely have traditions of arcane schooling. Frequently, such oddities arise from within the ranks of primitive Adepts, and their exceptional charisma tends to make them leaders of their tribes once their power becomes apparent. Sorcerers are also markedly more common among the intrinsically magical gnomes, and also among certain ancient bloodlines of the Suel and Bakluni who can trace their families back to the halcyon days before the Invoked Devastation and the Rain of Colourless Fire. 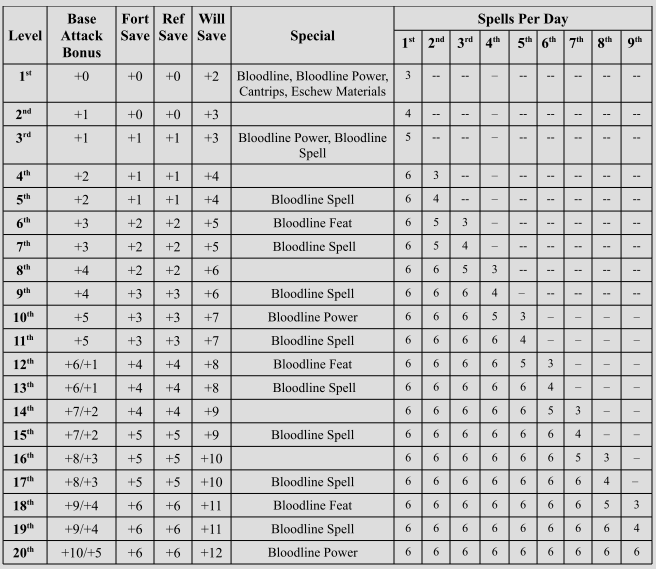 Sorcerers are proficient with all simple weapons. They are not proficient with any type of armor or shield. Armor of any type interferes with a sorcerer’s gestures, which can cause his spells with somatic components to fail.

A sorcerer casts arcane spells which are drawn primarily from the sorcerer/wizard spell list. He can cast any spell he knows without preparing it ahead of time, the way a wizard or a cleric must (see below).

Like other spellcasters, a sorcerer can cast only a certain number of spells of each spell level per day. His base daily spell allotment is given on Table: The Sorcerer. In addition, he receives bonus spells per day if he has a high Charisma score.

A sorcerer’s selection of spells is extremely limited. A sorcerer begins play knowing four 0-level spells and two 1st-level spells of your choice. At each new sorcerer level, he gains one or more new spells, as indicated on Table: Sorcerer Spells Known. (Unlike spells per day, the number of spells a sorcerer knows is not affected by his Charisma score; the numbers on Table: Sorcerer Spells Known are fixed.) These new spells can be common spells chosen from the sorcerer/wizard spell list, or they can be unusual spells that the sorcerer has gained some understanding of by study. The sorcerer can’t use this method of spell acquisition to learn spells at a faster rate, however. One the same table, wherever an asterisk (*) appears, the sorcerer gains a bonus spell known in accordance with those listed under their bloodline.

Upon reaching 4th level, and at every even-numbered sorcerer level after that (6th, 8th, and so on), a sorcerer can choose to learn a new spell in place of one he already knows. In effect, the sorcerer “loses” the old spell in exchange for the new one. The new spell’s level must be the same as that of the spell being exchanged, and it must be at least two levels lower than the highest-level sorcerer spell the sorcerer can cast. A sorcerer may swap only a single spell at any given level, and must choose whether or not to swap the spell at the same time that he gains new spells known for the level.

Unlike a wizard or a cleric, a sorcerer need not prepare his spells in advance. He can cast any spell he knows at any time, assuming he has not yet used up his spells per day for that spell level. He does not have to decide ahead of time which spells he’ll cast. 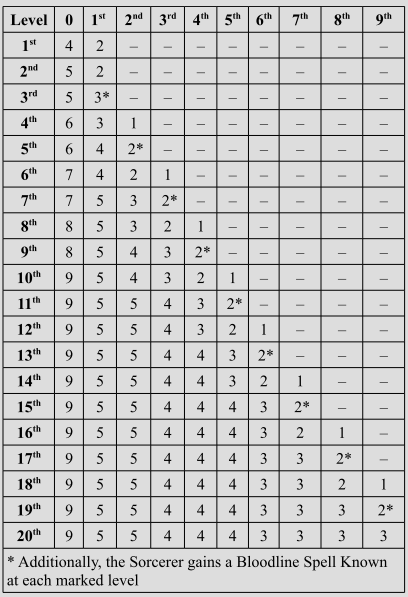 Sorcerers may cast a number of cantrips, or 0-level spells, each day, as noted under the Table: “Sorcerer Spells Known.” A sorcerer casts cantrips in the usual manner. However, those selected will not become exhausted after being cast, so may be cast again later that day. This means that all cantrips known may be cast far more often than 3.5 rules allow. A sorcerer may cast a given cantrip a number of times each hour equal to their class level, after which it takes their magical “wellspring” a small time to regenerate. In a manner of speaking, the magical energy gone into the cantrip is not exhausted, but it could be considered fatigued for a little while.

The intuitive approach of the sorcerer has certain advantages over the more ritualised and tradition-bound methodology of the wizard. To reflect their ability to discard some of the rules of arcane magic, a sorcerer gains Eschew Materials as a bonus feat at 1st level.

Each sorcerer has a source of magic somewhere in their heritage that grants them spells, bonus feats, an additional class skill, and other special abilities. This source can represent a blood relation or an extreme event involving a creature somewhere in the family’s past. For example, a sorcerer might have a dragon as a distant relative or her grandfather might have signed a terrible contract with a devil. Regardless of the source, this influence manifests in a number of ways as the sorcerer gains levels. A sorcerer must pick one bloodline upon taking her first level of sorcerer. Once made, this choice cannot be changed.

At 3rd level, and every two levels thereafter, a sorcerer learns an additional spell, derived from her bloodline. These spells are in addition to the number of spells given on Table: Sorcerer Spells Known. These spells cannot be exchanged for different spells at higher levels.

At 6th level, and every six levels thereafter, a sorcerer receives one bonus feat, chosen from a list specific to each bloodline. The sorcerer must meet the prerequisites for these bonus feats.

Filled with magical power that screams for release, sorcery is not so much a calling as a blessing—or a curse. For some sorcerers, this arcane birthright manifests in subtle and carefully controlled ways, assisting in their manipulation of others or the pursuit of lofty goals. For others, it is wild and unpredictable, the primal and explosive lashing out of a power greater than themselves. Presented below are a number of bloodlines representing the mysterious origin of your sorcerer’s abilities.

The following bloodlines represents only one of the possible sources of power that a sorcerer can draw upon. Unless otherwise noted, most sorcerers are assumed to have this arcane bloodline.

DM Note: Since only Candyce is a sorcerer, other bloodlines will be added as they become relevant to the game.